I’m sure this topic has been addressed in many ways in many other forums, but I’m going to weigh in on it anyway. It’s the role of women in video games, particularly the earlier ones. Once games started featuring recognizable characters, it was pretty typical that the heroes were male, and they had to rescue damsels in distress. Many of them were princesses, but some in more mundane and less monarchist games were non-royal girlfriends and daughters.

There have always been exceptions, though. One of the most obvious is Ms. Pac-Man, a female counterpart to a male character in the same way that they like to do in comic books. You know Supergirl, Batgirl, She-Hulk, and Spider-Woman. Now here’s Ms. Pac-Man! She does exactly what her husband (at least I assume they’re married) does, only while wearing a bow. It is interesting that they named her “Ms. Pac-Man” instead of “Pac-Woman” or “Pac-Girl,” though. It sounds somewhat more empowered. 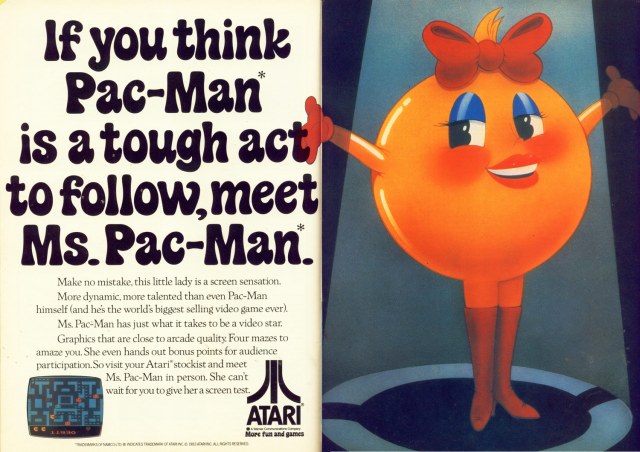 Super Mario Bros. was, of course, another game where the male heroes had to rescue the captive princess. Granted, the two Italian plumbers weren’t exactly white knights, but they were still men. In the Japanese SMB2 (eventually released in the States as The Lost Levels), the plot was exactly the same.

For the American SMB2, however, they struck a bit of a blow for feminism, even if it was likely to have been unintentional. The source game, Doki Doki Panic, featured a family of heroes. As it had both a mother and a sister, the playable cast was actually half-female.

SMB2 replaced the mother with Luigi, but still retained one female protagonist, who became the very princess the Mario Brothers had to rescue in the first game. She could hold her own, too; she wasn’t the fastest or strongest, but her hovering ability could come in handy.

So if she’s a competent fighter in her own right, why does she keep getting captured? Well, the American SMB2 is revealed to be Mario’s dream, so maybe Princess Peach only has this power in dreams? I don’t know that I’d buy that, though, as pretty much every SMB2 character who reappears in a non-dream game has the same abilities in the real world. Really, it kind of seems like Peach appeared as a hero simply because she was one of very few good characters who had been introduced to the series at that point. It ended up setting a precedent, though, at least in my mind.

The Princess is playable in a lot of the sport and party games, but there aren’t all that many typical adventure games with Peach as a protagonist. One that does use her in this role is Super Mario RPG, in which she’s primarily a healer. 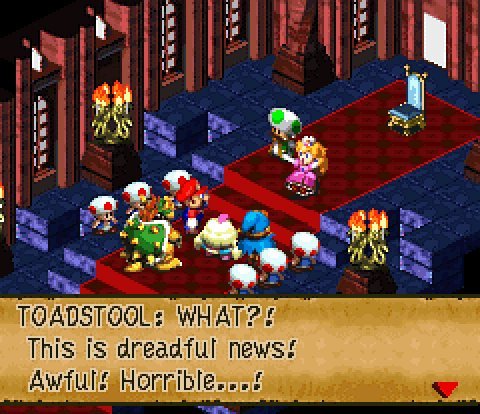 Peach as a white mage type actually makes sense with what had been previously established, as the manual for the first SMB says that she’s the only one who can break the spell that Bowser had cast on her kingdom. She’s also the main character in Super Princess Peach, which I’ve never played. From what I’ve heard, though, the Princess is a competent fighter, but uses a parasol and the power to tap into moods in order to defeat enemies. Those sound like pretty stereotypically feminine weapons to me.

Role-playing games, with their more diverse casts, often have playable female characters. Still, they often fit into the same stereotypes that we see when the women are helpless victims. It seems that, most of the time, they aren’t particularly good fighters. If anything, their skill is in magic, and usually healing magic at that.

Not that there’s anything wrong with white magic. Hey, I’d rather be a white wizard than a warrior, and I’m not sure I’d trust myself with black magic. But it still pigeonholes women into traditional nurturing positions.

One significant exception to this stereotyping in early video games is Samus Aran from the Metroid series.

Apparently the hero of the first Metroid game was originally considered to be male, but the influence of the Alien films led to the creators deciding the person in the power suit should be female. The way the game is set up, however, you’re not supposed to know Samus is a woman unless you win the game quickly enough, in which case she’ll take off her suit and jump around in her underwear. Oddly, she’s just as powerful this way, which makes me wonder if the suit was primarily to hide her identity. But why would she bother doing that on an alien world? By now, it’s common knowledge that Samus is female. While Sigourney Weaver inspired her character, her appearance is apparently actually based on Kim Basinger. I guess that would explain why she’s always teaching the Metroid larvae to hate Alec Baldwin. Seriously, though, while Samus is portrayed as an attractive woman when not in armor, her personality doesn’t seem to be especially gender-specific.

If anything, her tough and largely emotionless demeanor is more stereotypically masculine.

I get the impression that this would differentiate her from someone like Lara Croft, who’s also a bad-ass adventurer but is more eager to show off her well-maintained hair, long legs, and ample bosom.