To follow up on Wutz and Glegg, here’s another unscrupulous magician from the pages of Ozian history. Mooj is both a magician and a clockmaker, who was known to turn people into clocks. His story is told in Ojo in Oz, and there are spoilers for that book in this post, so be forewarned.

The King of Seebania describes Mooj as a wise man from the north, who worked his way into the good graces of his (the king’s) father. Eventually, the magician instituted a coup d’etat, somehow doing away with the old king and locking up his brother and daughter-in-law in a dungeon. As for the heir to the throne, Ree Alla Bad, Mooj made him promise to stay away from Seebania, and just for good measure went ahead and pushed him off a cliff. His wife Isomere turned out to already be pregnant, however, and the old king’s brother Stephen managed to bribe the guards and escape with the baby. And that baby was Dorothy, whom Stephen somehow managed to smuggle to Kansas. Just kidding. The baby was actually Ojo, and as Prince Stephen became afraid to talk unless absolutely necessary, he came to be known as Unc Nunkie, the Silent One. And now you know the rest of the story.

Not all of it, though, because the plot of Ojo is set in motion when Mooj finds out about the boy, and sends a message to the criminal community of Oz saying that anyone bringing Ojo to him would receive a reward of 5000 bags of sapphires. He does manage to get his hands on the boy, but Ozma and the Wizard of Oz arrive to save him. Ozma then proceeds to turn the crafty clockmaker into a drop of water in the Nonestic Ocean, deeming him too dangerous to leave in a conscious form.

While Mooj is said to have gained the support of the Seebanian populace by way of magic, and he’s seen in a crown and velvet mantle when Ozma and her companions confront him in Shamsbad, it doesn’t appear that he does a whole lot to take advantage of his position as king. Instead, he spends most of his time in his hut on a lonely mountain peak, tending to his clock-making. This led to some suggestion during the discussion of Ojo on the Nonestica mailing list that his goal wasn’t gaining possession of the throne so much as neutralizing Seebania as a regional power. 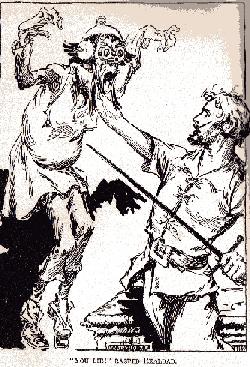 What makes Mooj particularly memorable is how Neill chose to draw him. Thompson describes him as “a bent and evil-looking old Munchkin,” and says that he looks “ridiculous” in royal regalia. Neill, however, chose to depict his face as showing signs of his chosen profession, resulting in a truly creepy individual.