Beware the Jabberwock, My Son!

Recently, a post on Drew Mackie’s blog featured the appearance of the Jabberwocky from the 1985 made-for-TV Alice in Wonderland.

This scene actually ended the first part of the movie, making the creators seem awfully sadistic. I’m not sure if I ever watched this adaptation all the way through, but I know I’ve seen the Through the Looking-Glass part a few times. The Jabberwocky is eventually defeated by Alice’s lack of belief in it, but not until after it’s put in other inopportune appearances and cast its shadow over the proceedings. While its appearance is that of a fairly standard dragon puppet, I hold that it isn’t the realism of monsters but how they’re presented that makes them scary or not.

The thing is, within the book of Through the Looking-Glass, Jabberwocky is a story within a story. Alice reads it toward the beginning, and later discusses its meaning with Humpty Dumpty, but none of the characters from it interact with the ones Alice actually meets. We don’t know whether it’s supposed to be real or fictional. It also used to confuse me that the poem was called Jabberwocky while the monster was referred to as simply “Jabberwock” within the poem, and I’m apparently not the only one. I think Lewis Carroll’s intention was that Jabberwocky is a poem about the Jabberwock, like the Odyssey is a poem about Odysseus. Nonetheless, it’s not uncommon for the monster to be referred to as the Jabberwocky, and for it to appear in the real world of Wonderland or Looking-Glass Land (well, as much as you can call a place from Alice’s dreams a “real world”). In the 2010 Tim Burton film, the Jabberwocky has the voice of Christopher Lee, and Alice has to slay it to save Underland (as Burton calls his hodge-podge of the settings of the two Alice books). As with much of that movie, I found the monster’s portrayal disappointing. Aside from the fact that it used its wings in walking, it was really just a run-of-the-mill dragon of the sort you see in cheap fantasy pictures.

Not that I wouldn’t be impressed if I saw it in real life, but they really could have done a lot more with a big-budget twenty-first-century movie. John Tenniel’s original illustration made the Jabberwock quite dragon-like, but gave it more unusual features as well.

In the Disney animated version from the fifties, the Cheshire Cat sings the first verse, which doesn’t reference the Jabberwock itself.

Alice also ventures into the tulgey wood and sees mome raths, although they aren’t anything like how Humpty described them in the book.

I have, however, heard that the Jabberwock was supposed to appear in the movie and to be voiced by Stan Freberg. This page describes a Little Golden Book that includes the character. I think my sister had a copy of this book that came with a read-along cassette.

I’m not sure why they didn’t include him in the finished version. If he’d looked like the other interpretations of the Jabberwock, I could see Walt and company considering him too scary, but this depiction isn’t at all frightening. There’s also some artwork from the Disney Archives showing a fairly direct, if cartoonish, interpretation of the poem based on early storyboards.

The poem and the monster have been quite influential outside the world of motion pictures as well. Carroll himself used the Bandersnatch and Jubjub Bird in his The Hunting of the Snark, and admitted that the island where the snarks live is probably the same as the one where the Jabberwock was slain in the tulgey wood. So while Looking-Glass and Jabberwocky might not take place in the same universe, Jabberwocky and Snark do. I believe it was Martin Gardner who suggested that the reference to the Jabberwock as “manxome” might imply a connection to the Isle of Man, although others have taken the word to mean “fearsome,” which makes more sense in context. I understand that vorpal swords have made their way into Dungeons & Dragons, and I know they’re in the first Final Fantasy. Later games in that series have the Jabberwock and Bandersnatch as foes. 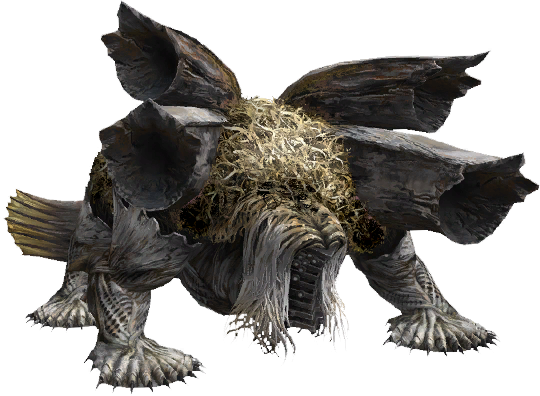 10 Responses to Beware the Jabberwock, My Son!