It’s common in mythology for people to consider nearby locations to be the center of the world and/or the first place to be created. Egyptian mythology, for instance, cites several different cities in Egypt as where land first emerged from the primordial waters. Was this the case for the Jews, however? It’s not entirely clear. Genesis 2 has people and animals first being created in the Garden of Eden “in the east.”

The garden is in the region called Eden (obviously)b, and it’s said that a river flowing through this region divides into four. The King James Version of the Bible tells us, “The name of the first is Pison: that is it which compasseth the whole land of Havilah, where there is gold; And the gold of that land is good: there is bdellium and the onyx stone. And the name of the second river is Gihon: the same is it that compasseth the whole land of Ethiopia. And the name of the third river is Hiddekel: that is it which goeth toward the east of Assyria. And the fourth river is Euphrates.” The Hiddekel is generally considered to be the same as the Tigris, and the Gihon often identified with the Nile. That the text refers to actual rivers and countries but doesn’t reflect real geography (the Tigris and Euphrates don’t have the same source, for instance) makes this an interesting brain teaser, and many locations have been suggested as that of Eden.

I’m really not sure even the writers of Genesis intended it to be an actual physical location, but that doesn’t stop the literalists. I’ve actually seen a few would-be scholars say Eden must have been in modern-day Israel, some even suggesting that it was where Jerusalem would later be built, based largely on a passage in Ezekiel that associates Eden with Jerusalem. In a way, this would make sense, considering that the priests of Judah tried to sell the Temple Mount as the only place where people could make sacrifices to God.

The usual precedent for this is said to be that it’s where Abraham almost sacrificed his son, which in and of itself is rather far-fetched. Indeed, one oddity of the Bible is how, despite its identification of Israel as the Promised Land, much of it supports the idea that this was primarily due to circumstance rather than divine will. The first direct mention of the land that would become Israel appears in the story of Abraham. As the tale goes, he was originally from Ur in Mesopotamia, but moved to Canaan on the advice of Yahweh. He didn’t have a fixed abode there, however, and the land was said to have already been ruled by various local kings. While he did buy a burial plot in Hebron, he also spent time in Egypt, and his only real claim to the land as a whole was through his belief in and covenant with Yahweh. His grandson Jacob later left Canaan altogether, settling in Egypt with his family. When Moses finally leads the descendants of Jacob out of Egypt, he claims that God promised them the Land of Canaan, but only if they steal it away from the people who are already living there. And Jerusalem, that ever-so-holy city where the Temple was built, was under the control of the Jebusites until the reign of King David.

The account of his conquering the city doesn’t make any reference to the Garden of Eden or Abraham’s attempted murder of his own son, and while not explicitly stated it seems that his attraction to Jerusalem might have been its easily defensible location. The odd part isn’t that these grand associations were retroactive, as I’m sure that happened all over the world. Rather, it’s that the Bible actually preserves these traditions that cast doubt on the whole Promised Land concept.

According to some of what I’ve read, rabbinical tradition does place greater importance on Mount Moriah. Whether or not the Garden of Eden was there, it is thought to be where God created Adam. Muslims hold that the garden is not on Earth at all, and when Adam descended to the surface of the planet, it was in Mecca. 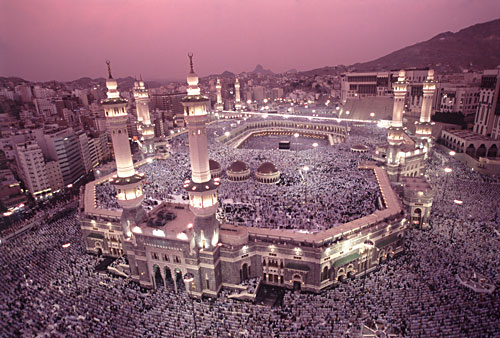 So there’s another creation myth that makes a city in the area the first place on Earth, and this was after much of the world had already been explored. And Joseph Smith’s location of the garden in Missouri was even more recent.

Really, I think the whole idea of linking creation with a place near where you personally happen to live just shows the short-sightedness of religion in general. Why would YOU be the ones fortunate enough to live at the Navel of the Earth, rather than anyone else? It’s no wonder that the Church was so reluctant to give up the idea that the Earth was the center of the universe, when they were working from traditions identifying specific cities as the center of the universe.

4 Responses to Whither Eden?