In my continuing quest to explore every last detail of the Oz books, I now come to a protagonist of The Gnome King of Oz who never appeared again. Grumpy and Kuma Party are both mentioned in passing, but I think this book is it for the subject of this post, Ozwold the Oztrich. An oztrich is pretty much the same as an ostrich, but with green feathers and blue eyes. Unfortunately, whoever colored in the plates didn’t abide by that description.

Also, many of the untrue stereotypes that people have of ostriches are actually true of oztriches. Ozwold really does bury his head in the sand and eat rocks.

Ozwold comes into the story when Peter Brown, Scraps, and Grumpy come across his disorienting desert home, the Bewilderness. This is a place in the Winkie Country where trees, bushes, and rocks constantly move around. 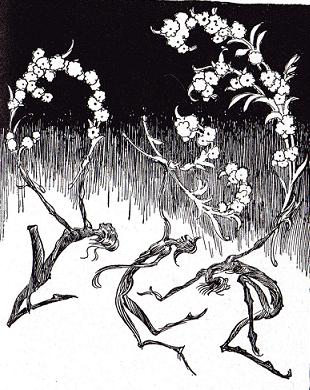 At the time they encounter him, the Oztrich is watching an egg for his wife, who is away visiting her mother. Ostrich eggs are usually incubated by the female in the daytime and the male at night, so I guess this would be twice the work for him. Peter and his friends convince Ozwold to carry them to the Emerald City in order to stop Ruggedo’s attempt at conquest, taking the egg with them. 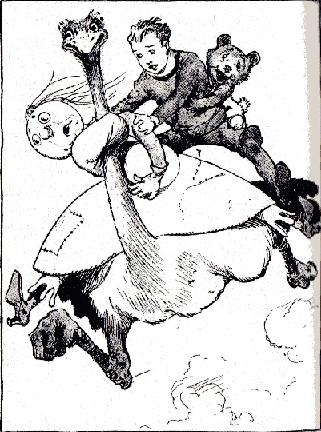 The egg hatches in the capital city, and Ozma gives the baby oztrich an emerald necklace as a Hatch Day present. 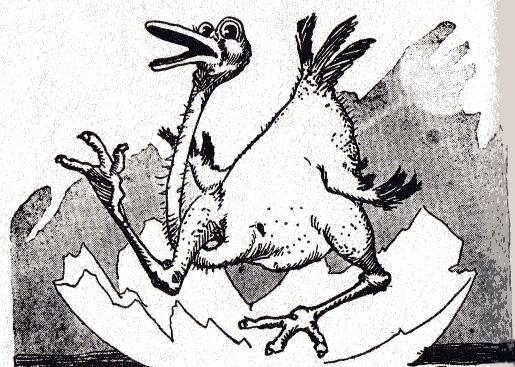 I don’t know that there’s a whole lot to say about Ozwold’s character. I suppose his main trait is that he’s steadfast and unflappable, being the only one who doesn’t get distracted when the party encounters the Bookman. He also has a habit of cutting words short when he gets angry or frustrated. I know my wife, who isn’t an Oz fan, uses Ozwold’s “ridick” at times. She didn’t get it from the Oztrich, but maybe he could be considered a trendsetter anyway. {g}

One bit of trivia is that, before this book was written, Ruth Plumly Thompson came up with the idea of the Oztrich for an Oz comic that she and John R. Neill were considering. The comic never came to pass, but Thompson wasn’t the kind to discard a good idea, so he showed up in Gnome King.