The Flying Avengers of the Greco-Roman World

Greco-Roman mythology is full of trios of scary women. I’m not sure how that meme got started, but you have the Gorgons, the Graeae, and the Fates. Another three dangerous females are the Furies, the Latin name for the Erinyes (who, as I mentioned earlier this week, appear in Kid Icarus).

They are known as the goddesses of revenge, and caused madness, disease, and famine. The Furies did have their own moral code, though, and you really didn’t anything to worry about unless you did something wrong. The goddesses were the avengers of wrongdoing, and mythology showed them especially concerned with crimes against women and the perpetrators’ own families. They tortured Orestes for killing his mother Clytemnestra, Oedipus for killing his father, Alcmaeon for killing his mother, and the Amazon Penthesileia for shooting her sister Hippolyte. 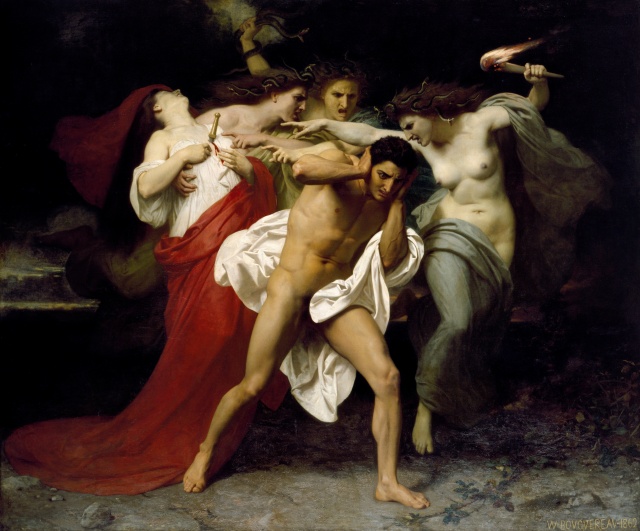 Not all of these crimes were committed intentionally, but the Furies’ authority went beyond that of the state, and they wouldn’t stop with their torments until the criminals fully repented. The sisters were named Tisiphone, Electo, and Megaera (not to be confused with Hercules’ first wife); and they were said to have been born when Kronos castrated his father Ouranos (that incident seems to be coming up quite a bit as of late), and a drop of the sky god’s blood fell down to Earth, producing these terrible triplets.

They were portrayed in a variety of ways, often as winged women with snakes in their hair (like the Gorgons), but sometimes much less ugly, and other times even more so. Some descriptions gave them the heads of dogs (probably a much scarier prospect back when wild dogs were much more common) and eyes that dripped blood. As with many other powerfully dangerous beings, people often wouldn’t refer to them by name, but rather as the “Kindly Ones,” sort of like how fairies were the “Fair Folk.”

Apparently one trio of creepy flying women wasn’t enough for the Greek mythological universe, however, as it also included the Harpies.

There were sometimes said to be two of four Harpies, but three is probably the most common number for them as well. They were filthy, uncouth vulture-women, known for thievery and defecation.

Some early references actually mentioned them as being beautiful, but that portrayal essentially died out over time. Their names were Aello, Ocypete, and Celaeno; and they were the children of the sea deities Thaumas and Electra. As such, they were sisters of the rainbow goddess Isis, and they were often associated with sudden gusts of wind. The Harpies served Zeus, and often tortured people on his command, the most famous being Phineas, King of Thrace. This king was also a prophet, but Zeus thought he gave away too much information. So the storm god banished the Thracian to an island where the Harpies would routinely steal his food, leaving him with barely enough to survive.

When the Argonauts arrived on this island, they summoned the Boreads, sons of the North Wind, to drive off the Harpies.

8 Responses to The Flying Avengers of the Greco-Roman World