The Real Horses of Oz

L. Frank Baum tells us in a few different books that there are no horses in Oz, aside from the magically animated wooden Sawhorse. 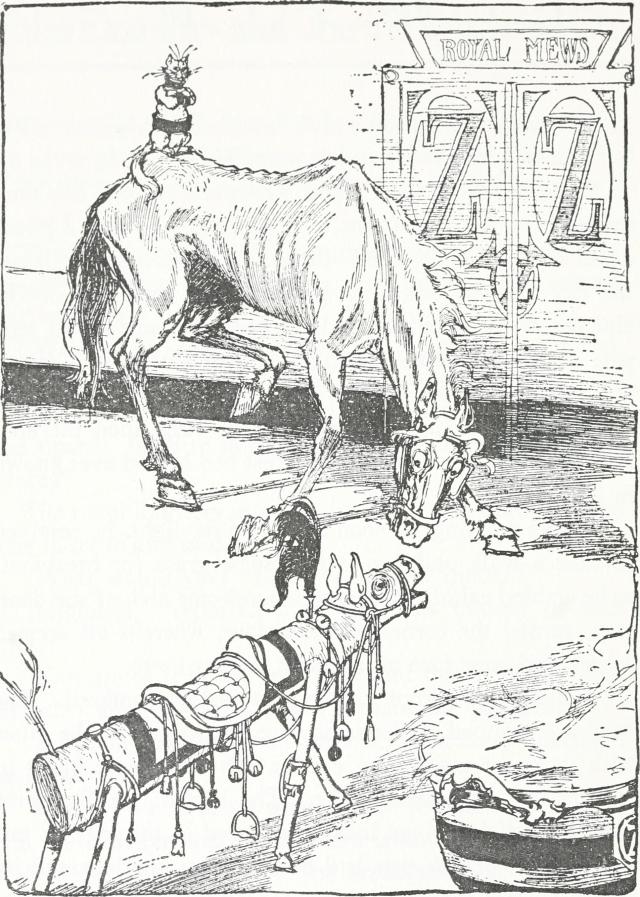 This seems to be an idea that he developed over time, however. In The Wonderful Wizard of Oz, he simply comments that the Emerald City doesn’t have horses “or animals of any kind,” perhaps to reflect their lack in the White City at the World’s Columbian Exposition. The White City inspired Baum’s descriptions of the capital of Oz, and I’ve read that the reason there were no animals there was that having to clean it up would ruin the pristine look. Baum later had numerous animals come to live in the Emerald City, but they’re presumably intelligent enough to limit their waste expulsion to specific areas. The first two Oz books have a few references that suggest Ozites are familiar with horses, but this changes in Dorothy and the Wizard, in which the palace staff has no clue what a visiting horse even eats.

This horse is Jim, a cab-horse from California, who by his own admission had previously been a Kentucky racehorse and a public cab puller in Chicago. 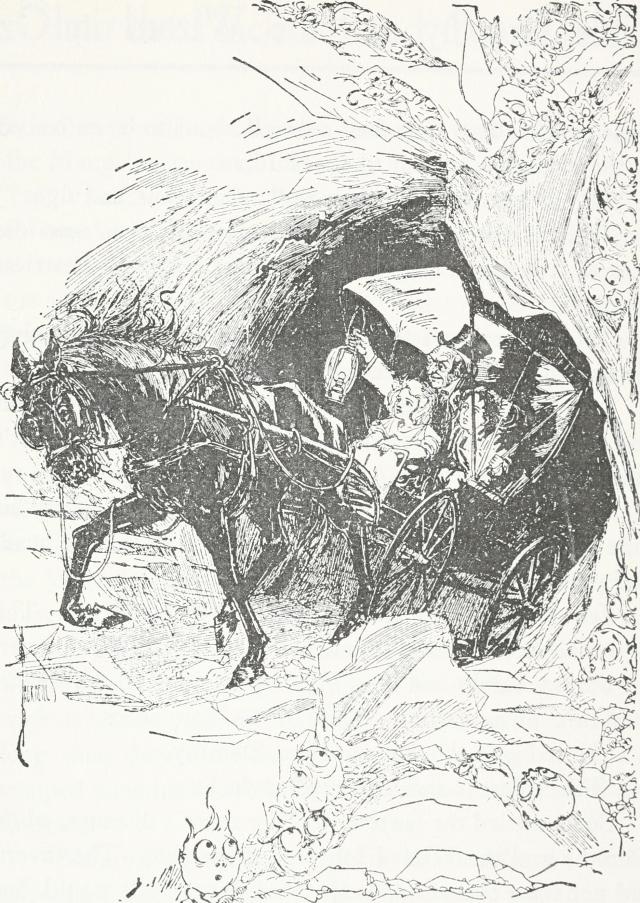 In his old age, he’s come into the keeping of Bill Hugson, a rancher who’s married to Aunt Em’s sister. When Dorothy comes to visit the ranch, the buggy in which she’s riding falls into a crack in the earth, taking her, Jim, and Bill’s nephew Zeb with it. During a series of adventures in various fairylands, Jim is able to talk, and he proves to be rather grumpy and curmudgeonly, but helpful all the same. While the Sawhorse is fascinated by his first meeting with a real horse, Jim views the tireless magical steed as unnatural and threatening. When the Sawhorse beats Jim in a race, the real horse lashes out against the wooden animal. Even though the Sawhorse cannot be hurt, this angers the Ozites, and Jim is eager to return home after that, feeling that he doesn’t fit in. 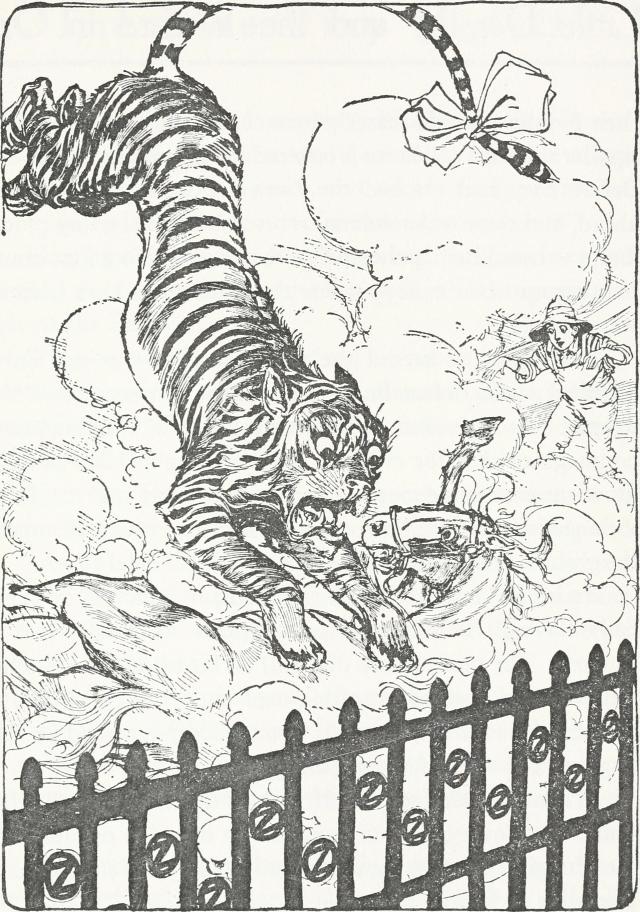 Nonetheless, I’ve heard of other authors returning Jim (and Zeb) to Oz. Both of them appear in Mary Rakestraw’s “Journal of a Journey” and Chris Dulabone’s Deadly Desert, and Greg Gick told me about a story he was writing that involved the return of the horse and the boy to the fairyland.

While Baum stuck to his “no horses” rule after that book, his successors were not as strict about this. Ruth Plumly Thompson, an equestrian herself, brought several horses into her Oz books. The first isn’t an ordinary horse by any means, but Joe King’s giant steed High Boy, who’s briefly discussedin this post.

In Yellow Knight, the Corumbians have a lot of horses, but like the people they were enchanted by 500 years. Speedy manages to disenchant Stampedro, a chestnut horse transformed into a horse chestnut, and the personal steed of the titular knight. Like other horse characters in the series, he’s proud but friendly.

Our next significant horse in the series is Chalk, the white horse with a golden mane important enough to have a book named after him. He’s known as the Wishing Horse due to his connection to the emerald wishing necklaces that were somehow transported from Oz to the nearby desert kingdom of Skampavia.

King Skamperoo wishes for a horse, and that brings Chalk, who claims to be “from Oz,” which is why he can talk in a country where such things do not normally happen. I’m not sure how Chalk can be from Oz when he comes into existence within Skampavia, but maybe he had some sort of life prior to that. Regardless, he knows how to work the necklaces, and helps his master to temporarily conquer Oz, and negotiates for a good deal when Dorothy and Bitty Bit show up to drive the usurper out of the land.

Another horse, the Thunder Colt Thun, begins life as neither an Ozite nor a flesh-and-blood creature. I mentioned some aspects of Thun here and here, but never really gave him a proper description. He’s from Anuther Planet, and made of metal like all of the life forms there. Due to something called the lenith law, Thun is totally silent, and only able to communicate by means of flaming skywriting. 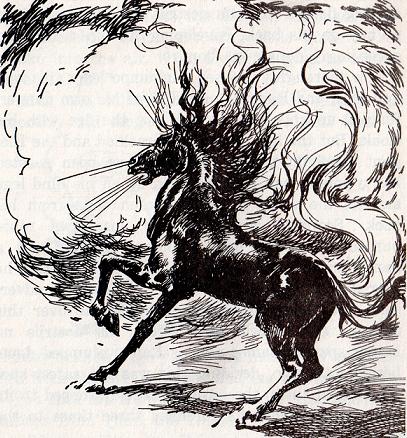 He is totally loyal to his mistress, Princess Planetty, who communicates with him by means of her voral staff. 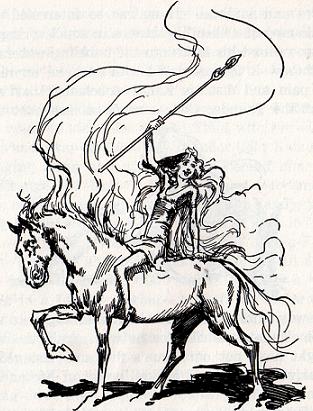 When Planetty and Thun both freeze up due to a lack of vanadium, the Red Jinn magically modifies the two of them for life away from their home world, which involves making them into flesh-and-blood beings, cooling down Thun’s flames, and enabling the colt to talk and hear. The horse was still able to skywrite and gallop soundlessly, however. At the end of the story, he settles in Regalia with Planetty.

Several horses appear in John R. Neill’s books, but none of them play very important roles. 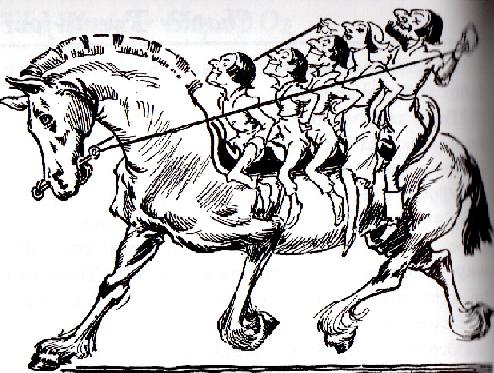 There are also a few mules, so I suppose horse-donkey marriages had been legalized by this point. {g} Horses are also pretty common in the books written by the McGraws, especially in the fox-hunting county of View-Halloo and the Heraldry of Halidom. In fact, Halidom has a ranking system for horses, with the ranks mentioned being Hack, Palfrey, Steed, Charger, and the coveted Destrier. One particular horse who plays a major part is Fred, the Steed of Prince Gules, who is quite snobbish. 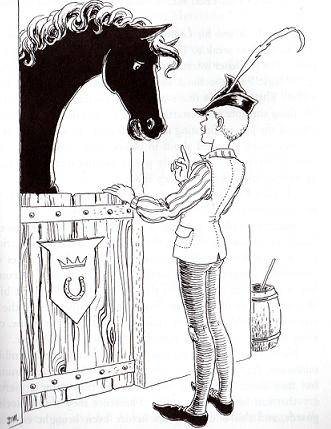 He is always bragging about how his cousin was a Destrier, and insists on being called by the name Federigo. After the Prince’s party finds the Circlet that restores intelligence to the kingdom, Fred mellows out somewhat, and even admits that his grandfather was a plow-horse. At the end of the adventure, Gules promotes his Steed directly to Destrier, and gives him the name Frederick the Great. 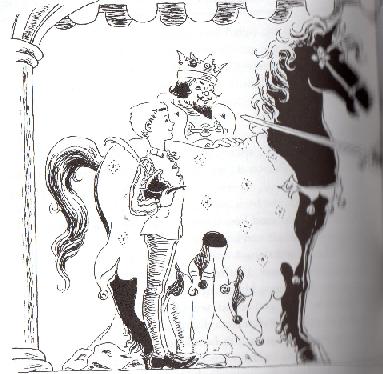 So, if Oz isn’t supposed to have horses, what’s with all of these equines showing up? I’d say the simplest explanation is just that Baum was working from incomplete information. Yes, he created the fairyland, but he was known to contradict his own blanket statements on occasion, so I don’t see too much difficulty in later authors doing the same. Most of these horses live in outlying areas anyway, so it’s not too surprising that they wouldn’t have been known about in the Emerald City before they had reason to come into contact with Ozma.

6 Responses to The Real Horses of Oz