I figured an appropriate Ozzy topic for this time of year would be the ferocious monsters that live there. I’ve already covered a few of them, including the Kalidahs, the Hip-po-gy-raf, and Quiberon. Here are some of the others that I haven’t addressed yet.

Gigaboo – This creature lived not in Oz, but in the neighboring Land of Mo. It is described as having a body like a turtle, a long neck like a goose, a round head with four mouths and seven eyes, ten legs, and two arms with claws. When this beast escaped from its cave, it immediately began destroying everything it came across. After a battle that resulted in his being cut apart, Prince Jollikin killed the Gigaboo by cutting off its head. This monster also puts in an appearance in the Captain Carrot/Oz/Wonderland crossover, along with the Mo stories’ main menace, the Purple Dragon. I’d probably have to put the name down as another that didn’t age well, since it’s uncomfortably close to a racial slur. 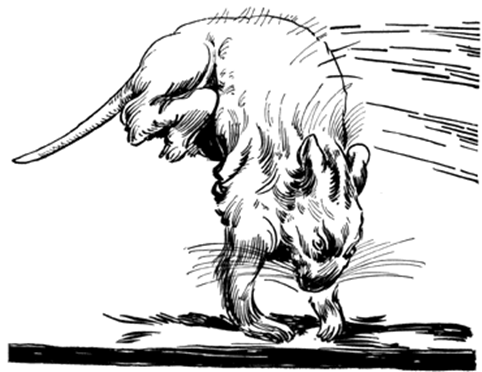 Chiss – He is a giant porcupine with the ability to fling his quills at enemies, and is considered by some Ozites to be an evil spirit. After Chiss had attacked Ojo’s party, the Shaggy Man gathered up the quills and threw them in a pond with a rock tied to them, thereby rendering the porcupine helpless. In Dennis Anfuso’s The Astonishing Tail of the Gump, Chiss has his quills back, explaining that he tricked a boy into retrieving them. The Wizard of Oz solves this by making the quills soft and unable to injure anyone. Magic mentions another giant porcupine who lives in the Forest of Gugu, but there’s no indication as to whether this one can throw its quills. I have to say that Chiss also sounded like he’d make a good video game enemy.

Rak – This creature has an enormous body, bigger than one hundred men put together. It is incredibly ravenous, eating any living thing, and is capable of running, flying, and swimming. A Rak can be detected by its smoky breath, which smells of salt and pepper. (And here I thought salt was odorless!) When the inhabitants of Oogaboo came across a Rak in the wilderness of Ev, Private Files injured it with his gun, but it made clear that these injuries would heal in a matter of days. It has been suggested that the Rak might be a variation on the mythical roc, and while John R. Neill never drew the Rak, an illustration of the animal in Jack and Larry Brenton’s Ork shows it looking quite bird-like. It’s also been suggested that “Rak” is a play on “car,” and hence a parody of automobiles. I’m not sure I buy this, though, considering that car exhaust doesn’t smell of salt and pepper.

Choggenmugger – An enormous and ancient creature that lived in the forest of Regos, and only grew stronger with every passing year. Choggenmugger was known to have eaten all the dragons, crocodiles, and serpents on the island. It met its ends at the hands and axe of Nikobob, a poor charcoal burner who was unknowingly armed with two of the Pearls of Pingaree, granting him incredible strength and protection from danger. Nikobob chopped Choggenmugger into pieces, and although Jack Snow reports that it eventually grew back together again, I haven’t seen any confirmation of this.

Weenix – This inhabitant of the Gillikin forests has a body like a bear and a head like a walrus. Mombi once got the better of a weenix by throwing purple pepper in its face.

Combinoceros – Described as having a rhinoceros head and a dragon body, Randy and Kabumpo came across a creature of this variety while bringing Jinnicky to Pumperdink. When Kabumpo stopped abruptly to avoid running into the monster, Randy fell off and landed on the Combinoceros with his sword out, thereby putting the creature out of commission. The dialogue that follows makes clear that, being an Ozian animal, it would recover at some point.

Snoctorotomus – An earth serpent, which travels through the ground like a sea serpent through the water, causing earthquakes wherever it goes. With help from his magic ring, Realbad managed to behead a Snoctorotomus that was threatening Ojo and Snufferbux. A few books later, in Captain Salt, there’s an appearance by a more traditional sea serpent. Well, it’s more traditional in that it lives in the sea, but not in that its teeth are actually white goblins armed with spears.

King Ato drives off this serpent by throwing hot taffy in its face. It is apparently not part of the same species of sea serpent as King Anko.

Guardian of the Muffin Tree – This composite animal is never given a proper name, and perhaps that’s understandable considering how bizarre it is. It has the body of an elephant, the tail of an alligator, and two heads, one of a wolf and the other an owl. As such, it is able to keep awake at all times. Terp the Terrible hired this creature to guard the Magic Muffin Tree so that no one else could eat of its fruit and threaten his supremacy over the Hidden Valley. The Scarecrow and Tin Woodman managed to hypnotize it and make it docile, but there’s no telling how long that lasted.

Tyrannicus Terrificus – Along the Winkie River is a series of caverns inhabited by prehistoric people and creatures, and the Tyrannicus is one of its most feared inhabitants. As suggested by the name, it has quite bit of tyrannosaur in its composition, but a much longer neck and arms, and elephant-like skin. When Dorothy’s expedition encounters this monster, Eureka tricks it into letting them escape, but it shows up again later. This time, Princess Melody’s watery army captures the Tyrannicus and imprisons it in an ice cave.