For some reason, the Koopa Troop is apparently intent on using weapons with faces and other human traits. There are exceptions, like the fairly ordinary cannonballs in Super Mario Bros. 3, but it often seems like Bowser wants his weaponry to be aware of what it’s doing. This strikes me as rather unnecessary with Bullet Bills, which have faces and arms, but don’t do anything but fly in a straight line after being launched from a Bill Blaster.

I believe one of the Nintendo Adventure Books had a conversation between two Bullet Bills, who bemoaned the fact that they couldn’t turn around. SMB3 is the first game to bring in Bullet Bills that CAN turn around, which are known as Missile Bills, and flash red. Bullet Bills in some of the 3-D games are also able to home in on pesky plumbers. Super Mario World introduces both the enormous Banzai Bills and the water-bound Torpedo Teds.

I’m guessing that Bills being paired with Teds is a reference to Bill & Ted’s Excellent Adventure.

Another sort of enemy, the Bob-omb, is basically your cartoon depiction of a bomb, which is to say a metal sphere with a fuse. Well, aside from the fact that they have eyes, feet, and wind-up keys.

The keys make me wonder whether they’re actually alive or just move around due to clockwork, but sources that I’ll mention a little later on suggest the former. You’d think a living bomb would be a tragic character, since it knows its only function in life is to commit suicide. Bob-ombs first appear in SMB2, in which they explode more quickly than the ordinary non-living bombs. They are also dropped from the sky by Albatosses.

The walking bombs are the only enemies from the game that show up in SMB3, and they have become regular parts of the series since then. In Paper Mario, there are some Bob-ombs that are able to regenerate after exploding, including the friendly Bombette. 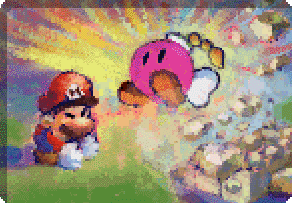 The Bob-ombs have their own king, a mustachioed fellow known as the Big Bob-omb. He is an ally of Bowser, but is friendlier to Mario than most of his fellows, admitting defeat and offering advice after the plumber bests him in Super Mario 64.

A Bob-omb was also the only enemy in the Super Mario Bros. movie to actually look like its in-game equivalent.