What Were They When They Were at Home? 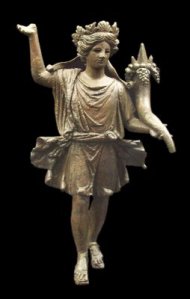 While Roman religion adopted many gods from the surrounding nations, especially Greek ones, they had some of their own religious traditions as well. One of these was the concept of household gods, who would protect the home and family. The Lares, often associated with the dead, were guardians of particular areas. Some protected fields, roads, and the Roman state; but it was also typical for each household to have its own Lares, represented by tiny statues. A family would use these Lares as divine witnesses for important events, and would pray and offer sacrifices to them.

Typically grouped together with the Lares are the Penates, the minor gods who protect a family’s wealth. They are sometimes regarded as the spirits of ancestors, and are thought to have originally been gods of the pantry. Later, they came to be associated with an entire household and its possessions. Families would make sacrifices to the Penates by burning some of every meal for them. According to legends that obviously arose after the Romans had borrowed the Greek pantheon, Penates were brought to Rome by Aeneas, who had taken them from Troy. These supposedly original Penates were guardians of the state, and were housed in the Roman forum.

The idea of household gods was certainly not unique to the Romans, and has manifested itself many ways throughout history, from East Asian ancestor veneration to European stories of elves and brownies who helped out in the home. In the book of Genesis, Laban’s daughters are said to have stolen their father’s household gods, with no indication that these figures would have been considered sacrilegious to Yahweh. In Terry Pratchett’s Hogfather, the wizards specifically associate Lares and Penates with other anthropomorphic personifications that perform minor tasks, like the Verruca Gnome, the Eater of Socks, and the Hair Loss Fairy.

4 Responses to What Were They When They Were at Home?