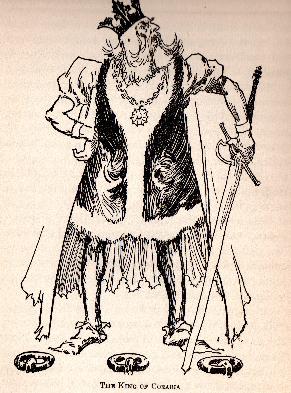 Since Jared Davis just addressed The Yellow Knight of Oz on his blog, I thought it would be appropriate to write about the two kingdoms that are restored in that book, Corumbia and Corabia. Since I can’t think of any way to fully describe these places without revealing the ending of Yellow Knight, there are going to be spoilers, so be forewarned. Anyway, Corumbia and Corabia are located in the far northern part of the Winkie Country, near Oogaboo, and bordering on the desert sultanate of Samandra. When these kingdoms are first visited in Yellow Knight, they are totally uninhabited, with it later being revealed that this was due to the Sultan of Samandra’s enchantments. Fearing an alliance between the two lands if the Prince of Corumbia married the Princess of Corabia, the Sultan turned the Corumbians into trees and other forest plants, and the Corabians into fishes and frogs. He also banished the Prince to the dull city of Pokes, and gave the Princess into the keeping of the Shah of Subterranea. Due to some fortuitous Ozian coincidences, everything comes together during the plot of the book in question, and it’s revealed that Sir Hokus of Pokes was actually Prince Corum of Corumbia all along, as well as the titular knight.

So how did Corumbia and Corabia adjust to being part of the twentieth century instead of the fifteenth? Well, I’m sure it was easier in Oz than it would be in other parts of the world. The fairyland is still full of old-fashioned monarchies, so it probably wasn’t too far outside their frame of reference. There is also no language barrier, as the ancient kingdoms speak English, hinting that Oz was English-speaking that long ago, or else that their speech was automatically translated. Really, people who were enchanted in the early fifteenth century wouldn’t have spoken the Elizabethan English of Shakespeare, but Ruth Plumly Thompson was probably just going for a general old-sounding speech, as would be used in tales of knights and princesses.

What are these two kingdoms actually like? Corumbia is heavily forested, even after the enchanted people are restored, and the fauna include rabbits and deer. There are also many horses, which were enchanted along with the people. The castle is constructed of gold bricks, and overall the impression given is that of England in Arthurian lore (not to be confused with the time in which the historical Arthur, if he even existed, would have lived). There were hints in previous books that Hokus had come from Arthurian England, so once it’s revealed that he was actually a native Ozite all along, it only figures that his part of Oz would resemble the semi-legendary past of the British Isles. Corabia is more hurriedly described, but it sounds pretty similar to its neighboring land. One detail that is provided is that its castle is made of silver and crystal. Perhaps due to the similarity of the name to “Arabia” and the kingdom’s closeness to Samandra, some Oz scholars have suggested that Corabia might have more of a Middle Eastern flavor, but I don’t see any real indication of that in the text. We do, however, have crowds shouting out, “Hola! Bravo!”, perhaps the only use of Spanish in Thompson’s Oz books. I believe Ruth Berman suggested that the Corabians might be the Ozian equivalent of Moors, but the only Corabian native whose physical features are described in detail is Princess Marygolden, who has curly blonde hair.