The Demigods Are Back in Town 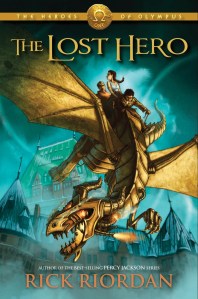 The Lost Hero, by Rick Riordan – After a detour into Egyptian mythology in his also excellent The Red Pyramid, Riordan is back to the Greek stuff with the first volume in the Heroes of Olympus series. Also back are Camp Half-Blood and many of the familiar characters from the Percy Jackson books. Percy himself has gone missing, but there are strong hints that he’ll return in the next book. The main protagonists this time are three new characters: Leo Valdez, a mechanically-minded son of Hephaestus who can control fire; Piper McLean, the daughter of Aphrodite and a movie star; and Jason Grace, a son of Jupiter with a bad case of amnesia. As hinted with that mention of Jupiter, this book delves more into the differences between the Greek and Roman gods. They’re largely the same, but the Roman forms demonstrate different aspects, as do their demigod children. And if you think Riordan basically exhausted Greco-Roman mythology with the five Percy Jackson books, there’s quite a bit more here. Making appearances this time are the North Wind Boreas, the windy ruler Aeolus, Medea, King Midas, the giants who once attempted to overthrow Olympus, and the wolf who raised Romulus and Remus. As before, most of them have started new lives in America, and the way Riordan works them into the modern world makes for some of the most interesting parts in these books. I’m definitely looking forward to more of this series.

7 Responses to The Demigods Are Back in Town