Return of the Yeti

As with other legendary animals popular with the cryptozoology crowd, stories of the Yeti, or Abominable Snowman, have only been documented to fairly recent times. Conspiracy theorists will insist that the creature appears in some versions of the Ramayana, but while I can’t find the actual context for this reference, I have my doubts. In the nineteenth century, European mountaineers reported their guides spotting footprints or a glimpse of a furry creature in the distance, but the yeti legend didn’t really take off in the Western world for some time after that. It was in 1921 that the term “Abominable Snowman” was coined; Charles Howard-Bury’s expedition came across some tracks that the Sherpa guides identified as belonging to the “metoh-kangmi,” which roughly translates as “man-bear snomwan.” Journalist Henry Newman apparently wasn’t sure of the meaning of the “metoh” part, and used artistic license to come up with “Abominable Snowman.” I have to say I’m kind of amused by this name. This snowman isn’t just nasty; it’s an ABOMINATION.

It was in the fifties that the Yeti’s popularity greatly increased. In 1951, mountaineer and prankster Eric Shipton took probably the best known photographs of what were allegedly Yeti footprints. Also, in 1954, anatomist Frederic Wood Jones examined hairs that supposedly came from a Yeti scalp in a monastery, and was unable to identify exactly the animal from which they came, but thought it was probably an ungulate of some sort. Despite the dubious nature of these discoveries, Yeti Fever swept the Western world, and President Eisenhower made the schoolchildren get vaccinated for it. Okay, that didn’t actually happen, but this popularity is quite likely why the 1964 Rudolph the Red-Nosed Reindeer made use of the creature. He was officially the Abominable Snow Monster of the North, but the characters usually called him “Bumble” for short. The special taught us two interesting facts about the Yeti: it can’t swim, and it will bounce after falling from a great distance. Cryptozoologists would probably say a stop-motion cartoon isn’t a legitimate source of information, but I say it’s just as much so as testimony from some guys in the Himalayas who were probably suffering from lack of oxygen.

Aside from Rudolph, another memorable use of the Snowman, at least for me, was as a boss in the DuckTales video game.

His appearance in this game is based on the cartoon episode “The Lost Crown of Genghis Khan,” which was in turn based on a Carl Barks comic story of the same title.

While at Walt Disney World for my honeymoon, I bought a figure of Mickey Mouse on a mine cart with a Yeti from the store at Expedition Everest. 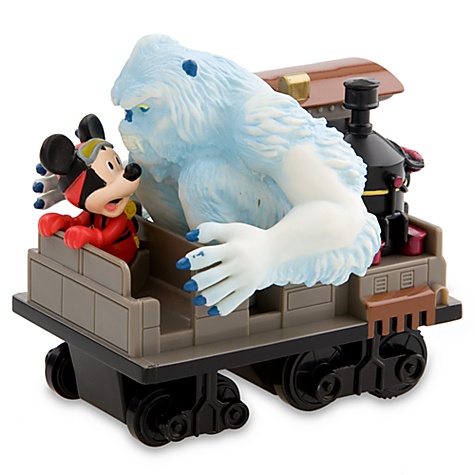 I believe it’s currently in storage. In Terry Pratchett’s Thief of Time, we learn that Discworld yetis are trolls with thick coats that live in the Ramtop Mountains near the Hub, and are capable of preserving their lives at certain points so they can restore themselves after dying. Terry definitely had video games in mind here, as indicated by an early reference to the creature as the “Save Game Yeti.” And in Final Fantasy VI, there’s a Yeti character named Umaro. You can find him in the mountains of Narshe and recruit him for your party, but he’s never directly controllable. Despite his size and power, he is subordinate to the rather diminutive Mog, whom he calls “boss.”

Interestingly, the English translation (well, at least the one for the Super Nintendo’s Final Fantasy III; I haven’t played any other version) referred to him as a Sasquatch rather than a Yeti, even though this term actually refers to the Abominable Snowman’s American counterpart, known as Bigfoot to his friends.

The Sasquatch is thought to live in the Pacific Northwest, and while the legends that inspired it date back some time, it was during the height of the Yeti’s popularity that Bigfoot gained celebrity status as well. I get the impression that Bigfoot photographs and videos tend to be faked more often than Yeti ones, probably because there’s no need to wait for snow before staging them. For some reason, belief in these cryptids seems to be more accepted by mainstream culture than, say, belief in dragons and unicorns. Maybe it’s just because they’re more recent. Anyway, according to Futurama, it won’t be until the thirty-first century that the existence of Bigfoot will be proven. Maybe not even then, as the end of that episode was kind of ambiguous. Bigfoot definitely showed up, but would anyone have accepted the testimony of the few who saw him?

15 Responses to Return of the Yeti