I’ve been meaning for some time to write a post on the main villains in the Dragon Quest series, but I had hoped I might finish at least one more game before going ahead with it. I haven’t done that yet, but I think I’ll just go ahead and profile the evil lords from the first four games, and then add on to this with later posts. If it’s Dragon Quest, you know you’re going to be fighting at least one demon lord, but some of these have more back story than others.

In the first game, the leader of the monsters is the Dragonlord (sometimes known as the Dragon King, DracoLord, or some variation on the same basic name), who at first seems to be a guy who has control over dragons. During the final battle, however, he reveals that he’s actually a blue dragon (or, in later versions, a purple dragon) himself.

There’s actually some preparation for this, in that one of the townspeople mentions something about the Dragonlord having thick skin and sharp claws. I seem to recall seeing a mention somewhere that only the Sword of Erdrick could harm the villain, but I’ve never tried getting to him with a weaker sword and seeing what happens. As it is, I never found the Dragonlord’s final form all that difficult, as long as your hero has sufficient hit points and magic power. Altering between attacking and the Healmore spell will eventually do away with him. The hard part is building your level up enough to make the battle feasible. One of the manuals that came with my copy of the original Dragon Warrior (if I remember correctly, it had both the regular instruction booklet and a somewhat thicker Strategy Guide) provided a little more back story on the Dragonlord, saying that he was an antisocial guy who lived in a cave, and discovered he had power over the dragons that lived there. Assuming this story is true (and I believe it did contain a few bits of information that were contradicted by later games), he was presumably raised in human form and only later discovered what he really was. Considering that his home is referred to as Castle Charlock, it’s not that unlikely that Charlock is his family name. Also, I’ve been among the fans to wonder if there’s some connection between the Dragonlord and the Dragon Queen in DQ3, who, after giving you the Sphere of Light that the Dragonlord later steals, dies and leaves behind an egg. Could the Dragonlord be the Dragon Queen’s son, or at least a descendant of hers? I don’t think it’s ever spelled out, but apparently a manga called Emblem of Roto supports the idea. By the way, the Dragonlord also appeared in two episodes of Captain N, “Three Men and a Dragon” and “The Trojan Dragon.” In the cartoon, he was always a dragon, and was red instead of blue or purple.

Mind you, getting colors right was never a strong point for that show.

After you defeat him, however, you learn that there’s an even greater evil to fight, known as Sidoh or Malroth depending on your translation. He’s a demon of destruction summoned by Hargon, and he’s a big scary guy without a lot to say.

The Dragon Quest Wiki entry claims that there are a few mentions of him before his appearance, but I don’t remember them from the original English translation. There is, however, an item called the Eye of Malroth, which is needed to access the cave leading to Rhone and a staircase in Hargon’s castle. Apparently this item is known as the “Evil Statue” in later translations, which doesn’t sound quite as impressive. Also making a brief appearance in this game is the Dragonlord’s grandson, who lives in the basement of Castle Charlock and isn’t too fond of Hargon horning in on his family’s conquest racket. He helps out your party by telling them about the Crests you need to find in order to talk to Rubiss, and if you visit him after beating Hargon and Malroth he says, “Let bygones be bygones, and let us be friends.” Good to know he doesn’t hold a grudge.

The immediate threat in DQ2 is the Archfiend Baramos, whom the King of Aliahan sends your character out to defeat.

Despite the fact that he looks kind of silly, he’s a formidable opponent. Besides, he’s far from the only goofy-looking video game villain. How do you think the people of Hyrule feel, constantly being conquered by a giant blue pig? 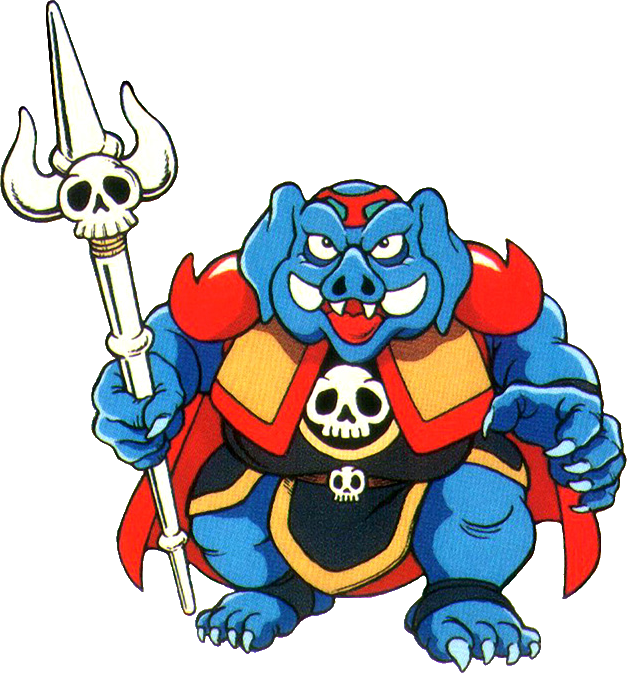 Also, Baramos has one of my favorite lines in the series:

I think I managed to defeat him on my first try, albeit with one of my party members sent off to Limbo. By this point, I don’t think anyone would be surprised that there’s an even greater evil waiting after Baramos’ death, and in this case it’s his boss, the Master Archfiend Zoma.

This guy certainly looks the part, and his henchmen include a zombified Baramos. Whether he’s the original Baramos reanimated or a dead relative, I’m not sure. I think it’s possible to defeat Zoma without the Sphere of Light, but he has twice as many hit points that way. Also, when you use it on him, you get to see him change colors. This demon lord lives in the world from the first two games, and his castle is the same one that the Dragonlord inhabited. It sinks into the swamp after you beat the Master Archfiend, and since this is a prequel, I guess that means the Dragonlord either reconstructed it or magically raised it again. The layout is much the same, but it has more traps in DQ3, so I suppose the Dragonlord was unable to recreate some of them.

Now we move on to DQ4, and the first villain in the series to really have a back story beyond “he’s evil and trying to conquer the world.” This time, the big bad guy is a demonic elf named Saro (in the original DW4 translation) or Psaro (in other versions). Actually, I believe his Japanese name most closely translates to “Pizzaro,” but I can’t say I know what he has to do with the guy who conquered Machu Picchu.

Psaro despises humans, and despite his girlfriend Rosaly’s pleas otherwise, he resolves to exterminate mankind.

He’s a more hands-on villain than some, actually showing up in person to commit some evil acts long before the heroes confront him. He’s looking for an alchemical formula called the Secret of Evolution, which will allow its user to become the most powerful being in the world. Yeah, I know that’s not how evolution works, but I guess “Secret of Metamorphosis” doesn’t have the same ring to it. During the course of the game, the world’s previous master villain begins to awaken. His name is Estark, and he and his entire palace were sealed away underground, as part of the “let someone else handle it” policy that everyone in video games whom the player doesn’t personally control seems to have. Eventually, however, people started mining for gold above Estark’s home (maybe they found some of his old treasures buried there), and during the course of the game they find the castle. Psaro sends his monsters to retrieve Estark, but the heroes manage to take him out before he can fully recover.

After Estark’s death, Psaro’s henchman Aamon goads his master into action by having Rosaly kidnapped and killed, leading Psaro to take up Estark’s mantle by using the Secret of Evolution on himself.

He’s a pretty obnoxious final boss, as he has about 15,000 forms you have to fight before he goes down.

While I haven’t won the Nintendo DS remake yet, I understand that it has the heroes restoring Psaro to his former self and teaming up with him to defeat Aamon.

I haven’t finished with DQ5, but I’ve played enough of it to know that its main villain is Grandmaster Nimzo, known as Mirudraas in the original Japanese. This Wiki entry suggests that the vastly different English name comes from the chess player Aron Nimzowitsch, which would explain why a lot of his henchmen are named after chess pieces. I’ll probably have some more on him after I actually do battle with him. Since DQ6 tells the origin of Zenithia, which features in both 4 and 5, it would seem appropriate to me for Estark to be the main villain, but he apparently isn’t. Instead, the head honcho is named Mortamor. The story of Estark’s time in power remains largely unknown, but the remake of DQ5 apparently not only lets you fight him in all his glory, but reveals he has a son called Starkers. DQ7’s demon lord is named Orgodemir, and is known to impersonate God. I haven’t played DQ8 at all and haven’t gotten that far in DQ9, and I don’t really want to be spoiled, so you’ll just have to wait if you’re really anxious to learn my take on their main bosses.

16 Responses to March of the Archfiends