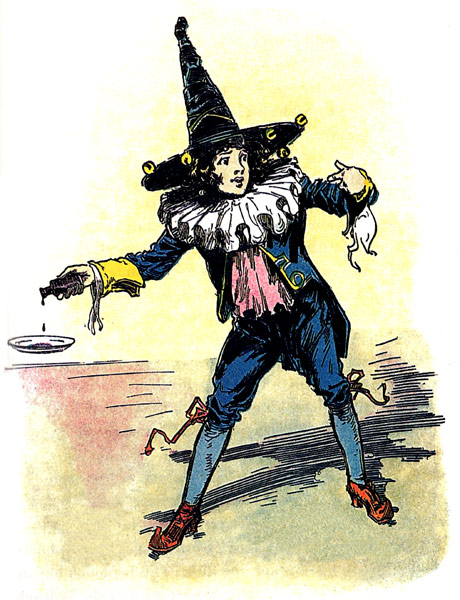 In The Patchwork Girl of Oz, L. Frank Baum introduces his fourth boy protagonist to the Oz series, Ojo the Unlucky. He’s not really a stereotypically boyish boy, but instead rather solemn and insecure, with a tendency to break out in tears more quickly than many of the girls.

When we first see him, he’s living in a small house in the middle of a blue forest with an old man called Unc Nunkie, nicknamed the Silent One because he hardly ever talks.

When he does, he generally only says one word, and sometimes two if he has to. I remember reading that James Thurber hated the character, but he wasn’t too fond of the series in general, aside from the first two books. When the two run out of food, they pay a visit to Unc’s old friend, the crooked magician Dr. Pipt. An accident results in both Unc and the magician’s wife Margolotte being turned to marble, and Ojo goes out on a search for the ingredients needed to restore them. When the story ends, Ojo and the restored Unc Nunkie are given a small house just outside the Emerald City, and Ojo loses the “un” from his nickname. We don’t see him a whole lot in later books, but we are told that he and Button-Bright become close friends.

Ruth Plumly Thompson gave Button-Bright only a few brief mentions, while Ojo and Unc Nunkie made minor appearances in Kabumpo and Jack Pumpkinhead. Eventually, however, she gave Ojo his own book, giving him a new adventure and exploring his back story. Not surprisingly for a Thompson Oz book, he and Unc both turn out to be long-lost princes. I have to say Ojo is one of my favorite Thompson books, despite its unfortunate stereotypes and occasional sloppiness, partially because the author builds on what we already know from Baum. In Patchwork Girl, we’re given two enigmatic references to a royal background for Unc Nunkie. Pipt introduces him to the Glass Cat as “the descendant of the former kings of the Munchkins, before this country became a part of the Land of Oz,” and a later passage says that he “might have been King of the Munchkins, had not his people united with all the other countries of Oz in acknowledging Ozma as their sole ruler.” It’s quite possible that Thompson would have made the two royal even without this precedent, but as it is, it meshes rather nicely.

To provide the basics of the back story (and this is, in case you haven’t figured it out already, full of spoilers), Ojo’s grandfather once ruled over the southern Munchkin Country, with help from his brother Prince Stephen. After Ozma takes the throne of Oz, the king relinquishes control of all territory outside his own country, Seebania. I already addressed the complicated issue of Munchkin monarchy in this post, but I suppose there’s no reason Stephen couldn’t have eventually been King of the Munchkins if Ozma hadn’t come along to limit Munchkin power. As it turns out, however, the Seebanian king’s wily counselor Mooj takes control of the kingdom, somehow doing away with the king (Thompson doesn’t go into detail on this point), pushing his son off a cliff, and keeping his daughter-in-law and brother as prisoners. Stephen escapes with his great-nephew Ojo, and remains silent in order to protect the two of them from Mooj.

The names of Ojo’s family are an interesting matter. While Baum named Ojo himself, it was Thompson who came up with the other names. In Ojo, we learn that his parents are named Ree Alla Bad and Isomere, and Unc Nunkie’s real name is Stephen. Ree Alla Bad’s father remains unnamed. While “ojo” is Spanish for “eye,” I tend to think that wasn’t on Baum’s mind when he named the character. I don’t recall him using very many names based on non-English words, and “Ojo” with the J pronounced in the English fashion is similar to the names of other Ozites, like Ugu and Wiljon from Lost Princess. That doesn’t mean someone couldn’t connect Ojo’s name to the Spanish meaning, however; in fact, I’m kind of surprised March Laumer didn’t do that, since he enjoyed multilingual puns. “Ree Alla Bad” is a rather unwieldy name, and comes across as vaguely Arabic-looking. I believe Aaron Adelman proposed the idea that “Bad” is Ozish for “son of,” meaning Ojo’s full name would be Ojo Ree Bad, and the former King of Seebania would have been named Alla (I suppose that means he likely wouldn’t have been a Muslim). In Arabic, “bad” denotes a city (and indeed, the capital of Seebania is called Shamsbad), so another possible interpretation might be that Ojo’s father is from a place called Alla Bad. As for Isomere, her name was presumably a play on “isomer,” a chemical term. If you’ve read my short story “The Red Desert of Oz,” I consider Isomere to be the sister of King Ketone Aldehyde, even though I couldn’t figure out a way to work it into the story itself. And compared to these names, the ordinary “Stephen” seems out of place.

25 Responses to Everything’s Coming Up Ojo