It’s a Round, Round Table

We all know about the Knights of the Round Table, King Arthur’s fierce warriors, initiators of chivalry, hunters of the Holy Grail, and able to take out Sephiroth with no trouble at all. But did the Knights really exist? I think that’s almost definitely a no, since the age of chivalry was long after the time to which King Arthur is usually dated. In fact, most of the details of the Arthurian court more closely reflect the situation at the time the tales were written, between the twelfth and fifteenth centuries, a period for which the Kings of England are all clearly accounted. Arthurian lore is full of anachronisms, but I doubt too many people really care, as long as the stories are interesting. The first known mention of the Round Table was in 1155, in a poem written by a Norman named Wace. According to him, the table was round so that Arthur’s nobles would not fight over status. Robert de Boron elaborated on the origins of the table, crediting its origin to (who else?) Merlin, who modeled it on the table from the Last Supper. I don’t think there are stories of that table being round, but Merlin made it that way to symbolize the circular Earth, or something like that. It included one seat, the Siege Perilous, which symbolized that of Judas Iscariot, and only to knight destined to obtain the Grail could sit there. The lore has it that the table was originally given to Uther, but passed to King Leodegrance of Cameliard after this king’s death. When Arthur married Leodegrance’s daughter Guinevere, the King of Cameliard gave him the table as a wedding present.

How many Knights of the Round Table were there? Well, while the number varies from as few as twelve to as many as 1600, the generally accepted number is 150. That strikes me as rather too many people to effectively communicate across a single table, but I suppose it might have been all right as long as the knights spoke in an orderly fashion. If Sir Gawain and Sir Gareth are loudly complaining to each other about how stale the rolls are, that could mess things up, but I guess that wouldn’t have been chivalrous. There’s a round table at Winchester, which Sir Thomas Malory associated with Camelot, that has the names of twenty-five knights engraved in it. This table only dates back to the thirteenth century, so there’s no way these engravings would be authentic, but the knights mentioned there are some of the most popular in the legends. And for what it’s worth, the summon in Final Fantasy VII produces twelve knights, plus Arthur himself. Little is known about many of the knights, and writers dealing with the Round Table are prone to invent their own, and why not? Here, I’m only going to write about the more prominent knights, starting with…

Sir Lancelot du Lac – The most powerful and devoted of the knights, yet not at all the purest, as he had a long-standing affair with Guinevere. This was considered an example of courtly love, because apparently Arthur wasn’t able to provide enough in that department. He was French, the son of Ban of Benoic, and was introduced to the tales by a French author, Chretien de Troyes. He is known as “Du Lac” because he was raised by the Lady of the Lake, the same fairy woman who presented Excalibur to Arthur, and maybe or maybe not the same as the enchantress who imprisoned Merlin. 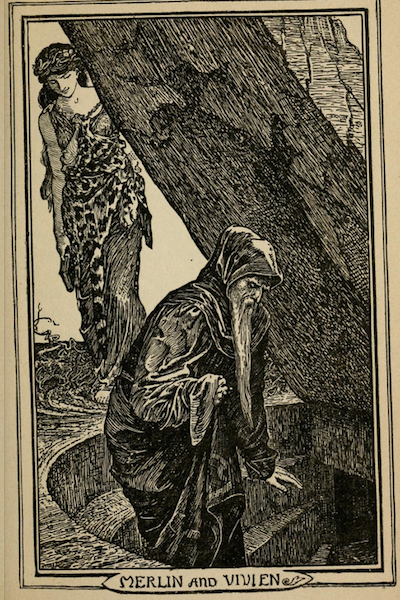 When he was tricked into sleeping with Elaine of Escalot, the product of their union was…

Sir Galahad – He was actually named after his father, whose given name was Galahad, although he always went by Lancelot. The younger Galahad was brought up in a nunnery by his great-aunt, and knighted once he reached adulthood. As a lifelong virgin, he was essentially the perfect knight, and thus was actually able to view the Grail. He died not long after his second viewing of the relic.

Sir Perceval – In earlier versions of the Grail saga, he was the hero, who actually found the holy object. He was also the one who was able to sit in the Siege Perilous. While this role was later supplanted by Galahad, Perceval is still often said to have at least viewed the Grail, as one of Galahad’s companions. He was known as somewhat of an innocent, having been brought up in the woods by his mother, who didn’t want him to die in combat as his older brothers had. He ended up becoming a knight anyway, however, despite inadvertently being rude to Arthur when he first arrived at court. He proved his worth by slaying the Red Knight, who had insulted Guinevere by pouring wine over her head. Upon killing the offending knight, he took possession of his vanquished opponent’s weapon, armor, and horse, and was hence often known as the Red Knight himself. He was also the nephew of the Fisher King, and Robert de Boron reports that he inherited this king’s domain and position as Keeper of the Grail. 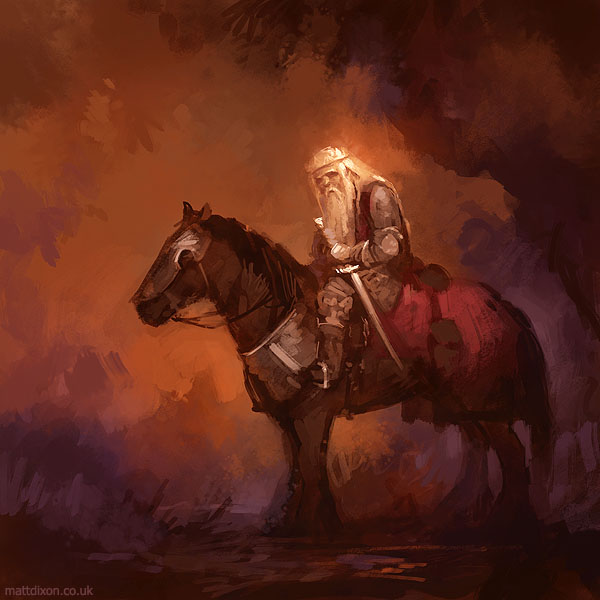 King Pellinore – While he is a genuine character in the traditional Arthurian legends, I’d say it’s T.H. White who really makes him interesting. In The Once and Future King, he’s a kindly but confused old man, constantly in pursuit of the Questing-Beast. 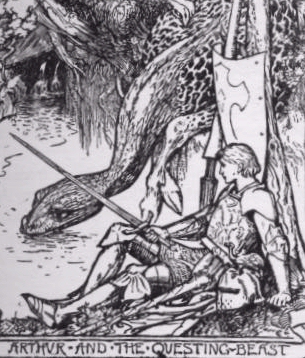 Indeed, White portrays Pellinore’s hunt for the beast as more of an everlasting game than an actual attempt to kill the monster. He often appears together with a knight named Sir Grummore Grummersum. I thought Grummore might be an original creation of White’s, but he actually does appear in Malory’s list of knights, and is quite likely the same as Sir Gromer from a humorous fifteenth-century poem about Arthur and Sir Gawain. Well, at least that’s where the NAME probably comes from; his character in White is totally different. Anyway, getting back to Pellinore, the same basic character appears in the musical Camelot. As for the history of the character, really, it’s a bit confusing. It’s never entirely clear what his kingdom is, although some have thought it might be Angelsey off the coast of Wales. Some tales make him the father of Perceval, but this is by no means consistent. What does seem to be pretty much a constant for Pellinore is that he killed King Lot of Orkney in battle, hence creating enmity between the two bloodlines.

Sir Gawain – The son of Lot of Orkney and his wife, who happens to be Arthur’s half-sister, Gawain is said to appear in more Arthurian legends than any other knight. He dates back to Geoffrey of Monmouth, and came to be known as the ladies’ man of Camelot, having had several children with different women. There are also legends that say his strength varied with the position of the sun, so he was strongest at noon and weakest at night. While the stories aren’t totally consistent about his siblings, it was pretty common for his brothers Agravain, Gaheris, and Gareth to also be identified as part of Arthur’s court. It was Gawain who killed Pellinore, but his most famous adventure is his encounter with the Green Knight (not to be confused with Zim Greenleaf‘s alternate personality).

Gawain beheaded this knight when he showed up at Camelot on Christmas, but the knight simply picked up his head and told Gawain to stop by the Green Chapel in a year’s time for the return blow.

People were apparently a lot hardier back then.

Anyway, Gawain kept his appointment, and the Green Knight spared his life, only giving him a small nick on the neck. It turned out that the whole thing was some sort of trick by Morgan le Fay.

Sir Ector and Sir Kay – When Arthur was born, Merlin brought him to Ector to be raised, so he was the king’s foster father and Kay his foster brother. Both became Knights of the Round Table, but Ector never plays much of a role after that, as far as I can tell. Kay, on the other hand, becomes Arthur’s seneschal, and serves in his various military campaigns. As Kay’s character evolved, he came to be seen as a surly braggart with overconfident views on his own abilities. But hey, he was family! Foster family, anyway.

Sir Bors – The son of a king of the same name, Bors came to be known as the third knight who completed the quest for the Grail, along with Galahad and Perceval. After the birth of his own son Helin le Blank, the product of an affair, Bors decided to remain chaste for the rest of his life. Indeed, after Arthur’s death, he gave up knighthood and became a monk. I’d say that’s pretty extreme, but maybe the child support was just too much to handle. By the way, King Bors and King Ban are brothers, making Bors Lancelot’s cousin. Also, I seem to recall seeing “Bors” used a sample name in video game manuals, probably because it could fit in one of the old four-letter limits. Well, so could “Kay,” but people are probably less likely to immediately think “Round Table” with that name.

Sir Bedivere – King Arthur’s loyal marshal and steward, who was made Duke of Normandy after Arthur conquered it. According to Malory, he was the one who threw Excalibur back into the lake after Arthur’s death, which must have been quite a feat for a one-handed man. Yes, Bedivere is generally identified as one-handed, having lost his other hand in battle. Despite this, however, he’s a fierce fighter and incredibly handsome, sometimes said to be the most attractive man at Arthur’s court. 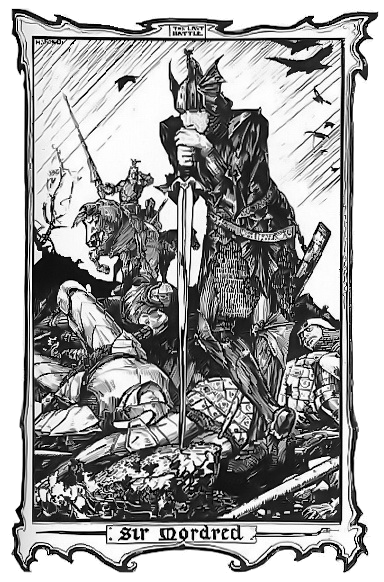 Sir Mordred – I could go on with these knights, but I think it’s about time to wrap things up, and what better way to end than with the guy who wrapped up Arthur’s life? This treacherous knight was part of Arthurian lore from very early on. The Annales Cambriae, compiled around the tenth century from even earlier sources, and hence long predating the tradition of the Knights of the Round Table, makes mention of him. The year 537 is said to have been that of “[t]he strife of Camlann, in which Arthur and Medraut fell.” Geoffrey of Monmouth decided that Mordred was Arthur’s opponent, and later authors developed his back story much further. In the story as it developed, Mordred is the son of incestuous union, the product of an unwitting affair of Arthur himself with one of his witchy half-sisters. Mordred eventually came to Camelot to join the knightly order, and Arthur left him in charge while fighting on the European continent. He returned to Britain upon learning that Mordred had set himself up as king, and the two of them ended up killing each other in battle. The successor to the throne is usually identified as Arthur’s cousin Constantine, although some stories say that Mordred’s sons challenged him.

On second thought, let’s not go to Camelot. ‘Tis a silly place.

7 Responses to It’s a Round, Round Table