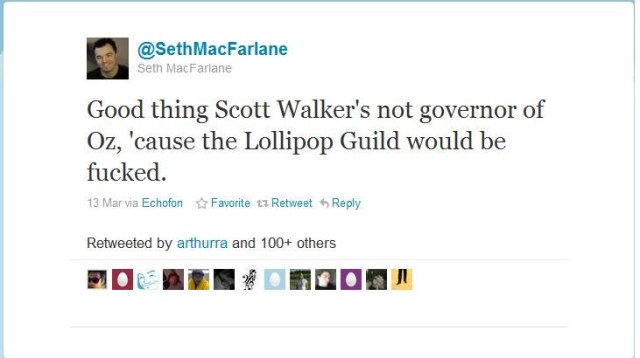 This tweet from Seth MacFarlane made me think of this scene from the 1910 Wizard of Oz, because I’m weird like that. 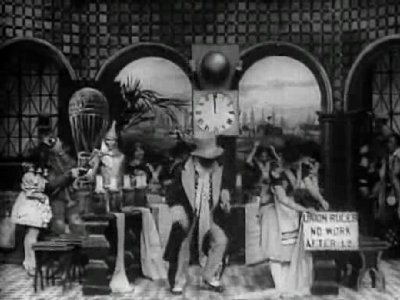 Of course, neither of these are canonical as far as the Oz books are concerned, so that made me wonder if the Oz of the books would have unions.

Both The Road to Oz and The Emerald City of Oz include broad descriptions of work in Oz. In the former, the Tin Woodman assures the Shaggy Man that “no one works more than half his time, and the people of Oz enjoy their labors as much as they do their play.” It’s been suggested that “half the time” would mean a twelve-hour workday, but Emerald City clarifies things by stating, “Every one worked half the time and played half the time, and the people enjoyed the work as much as they did the play, because it is good to be occupied and to have something to do.” Since I don’t think sleeping could be considered “playing” by any reasonable person, we’re probably looking at something closer to an eight-hour workday, as is pretty common in the Great Outside World nowadays. Emerald City goes on to say, “There were no cruel overseers set to watch them, and no one to rebuke them or to find fault with them. So each one was proud to do all he could for his friends and neighbors, and was glad when they would accept the things he produced.” Also, it’s pretty constant in L. Frank Baum’s Oz books from Road on that there is no money in use in Oz, although later authors don’t always agree on this point. So the general impression is that Ozites wouldn’t need unions. They don’t need to stand up to management because there IS no management, and there couldn’t be raises if no one is paid anyway. That said, Baum was originally planning on ending the series with Emerald City, which could explain why he really plays up the utopian aspects of Oz in that book and its predecessor. When he returns to the series with Patchwork Girl, we learn that Oz has poor people (albeit poor in resources rather than money), and at least one man who isn’t interested in doing any work at all. For all Baum says about everyone enjoying their work, I’m sure there must be exceptions. It’s all very well to enjoy your work as, say, a farmer, grocer, or carpenter; but what about the people who clean the streets? And even though the Oz books were written at a time when such a thing wouldn’t have been addressed in children’s literature, I assume SOMEBODY has to clean the Royal Stables, right? Granted, sentient animals are probably going to be less messy than the ordinary non-talking kind, but it still involves handling waste products. And I’m really going to extremes here anyway; there might well be Ozites in less disgusting positions who don’t particularly enjoy their work. It can’t possibly work out that EVERYONE can do what they love for a living, can it? Or is that part of the fairyland magic? There might also be people who milk the system by taking what they want from the communal storehouses without working. Hugh Pendexter dealt with this in his Wooglet, in which we learn that people like that are exiled to an island. I’m getting off the main topic here, though, which is whether there’s such a thing as collective bargaining in Oz. Since Ozma is eager to always do the right thing, you’d think she would allow it, but we all know that Ozma often doesn’t make the best decisions. We do have one hint in Rundelstone that Oz has unions of a sort, though, as Poco is a member of the Ozian Actors’ Guild.

2 Responses to Oz on Strike