I had previously mentioned that I thought Dumbo was the shortest Disney animated feature, but technically that’s not true. The shortest is actually Saludos Amigos, a collection of four short cartoons interspersed with footage of Disney employees in South America. The tour of the continent was part of the Good Neighbor Policy that the United States had toward South America, and the cartoons were all combined into one feature film because Disney thought they might not be all that successful on their own. The cartoons are: 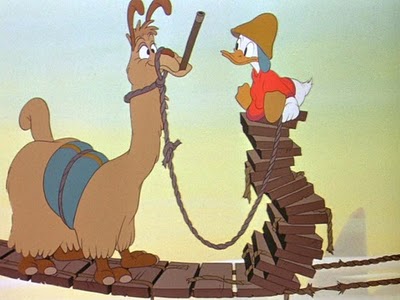 Lake Titicaca – This one utilizes the common tactic of a narrator playing straight man to a cartoon character, in this case Donald Duck, who’s visiting the titular lake. It’s a quite slapstick affair, with Donald ruining a reed boat and trying to get a llama across a broken suspension bridge. 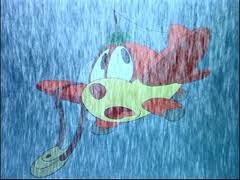 Pedro – One of many cartoons that bestows life on an inanimate object, the hero this time is a young Chilean airplane flying his first mail route. Also brought to life is Aconcagua, the highest peak in the Andes, which provides a nemesis for Pedro. Honestly, this short didn’t really do anything for me, although I kind of liked the idea of the evil mountain. Apparently a Chilean cartoonist was so bothered by the idea that Pedro might be the image the outside world has a Chile, the short inspired him to create his own cartoon character, Condorito. 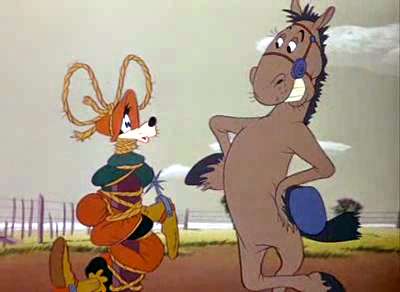 El Gaucho Goofy – Another narrator-as-straight-man cartoon, this time with Goofy learning the life of the Argentinian gaucho, and being the object of affection for an amorous horse. Old cartoons were never shy about depicting really awkward romantic situations, were they? The version of this cartoon that I saw had been edited somewhat to remove scenes of Goofy smoking a cigarette. See here for details. 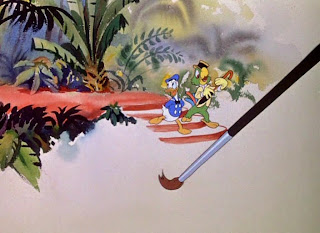 Aquarela do Brasil – Donald gets a second South American outing, in which he meets the Brazilian parrot José Carioca. José teaches Donald about the samba to the song that provided the short’s name. Often known simply as “Brazil,” it’s a celebratory song about the nation with a very recognizable samba beat. It was featured heavily in Terry Gilliam’s film Brazil, and Beth noted the similarity to the Moxy Früvous song “I Love My Boss.”

Anyway, the title actually means “watercolor of Brazil,” and Disney took that literally, showing scenes of the nation being painted around Donald and José. At the end of this cartoon, the whole movie ends abruptly, although the video Beth has includes some behind-the-scenes footage after the feature proper.

So what is there to say about this one? Taken individually, the cartoons are well-rendered and have their moments of cleverness, but they’re nothing spectacular. Taken as a whole, though, I like the idea of a set of themed shorts about South America, and there’s an interesting historical value to the picture.