Who’s Been Sleeping in My Porridge? I’ve seen a few people ask why, in “The Story of the Three Bears,” the Mama and Papa Bear are sleeping in separate beds. In fact, this was actually a plot device in Jasper Fforde’s The Fourth Bear, as was how one bowl of porridge could be too hot and another too cold when they were supposedly poured at the same time. It’s not unheard of for couples to sleep apart [1], but it’s definitely rare. Actually, however, there might be a real reason for this, which lies in the history of the tale. In earlier versions, there’s no indication that the bears are even related, and all three are referred to with male pronouns. They’re described as the Little, Small, Wee Bear; the Middle-sized Bear; and the Great, Huge Bear. So there’s no reason for them to be sharing beds, and since everything coming in threes was a vital theme for the story, the three beds remained when two of the bears became a married couple. Actually, in the earliest written version, penned by Robert Southey in 1837, the intruder in the bears’ house is an old woman who was apparently wandering around in the woods without having taken her medication. Southey even suggests that she might have been taken to a sanitarium after escaping from the house. 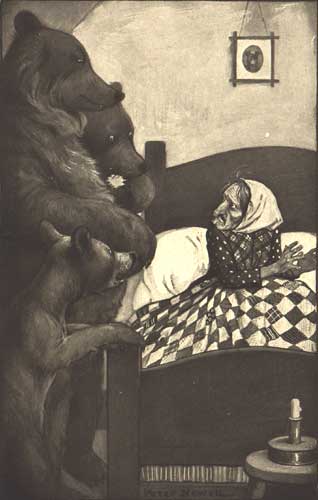 According to Maria Tatar in The Annotated Classic Fairy Tales, the old woman became a little girl in 1850, the bears became a family in 1852, and the name “Goldilocks” didn’t appear until 1918. I suspect that the change in age for the property-disrespecting protagonist was for the purpose of moralizing, as a kid can presumably learn her lesson about such things without being locked up.

Regardless of the relationship of the bears and the age of the female doing the breaking and entering, I think one thing the story is clearing trying to do is to reverse expectations about civilization. The bears are quite genteel, and Goldilocks breaks into their house without permission and starts using their stuff. Contrary to popular rumor, I haven’t seen any indication that the bears eat Goldilocks in any of the tale’s better-known retellings, but Eleanor Mure’s version has them impale the proto-Goldilocks old woman on a church steeple.

[1] To give full disclosure, my wife and I generally don’t sleep together, because her bed is too small and she finds mine uncomfortable. We’re living a fairy tale life, but unfortunately it’s “The Three Bears.”

2 Responses to Who’s Been Sleeping in My Porridge?