When Allah Ends It All

What I know about Islamic eschatology indicates that their beliefs about the end of the world aren’t too different from those of most other religions. In fact, as with much of Islam, it appears that a significant portion of it is taken wholesale from Judaism and Christianity. One main event that many Muslims think will mark the beginning of the end is the coming of the Mahdi, a savior figure who will lead the righteous Muslims and abolish much of the evil on Earth. Shiites tend to link the Mahdi with the long-lost Twelfth Imam, while Sunnis who accept the Mahdi doctrine seem to think of him as basically just a normal guy who rises to power.

Wikipedia has a list of characteristics that the Mahdi is supposed to have, including being named Muhammad (which hasn’t stopped some people NOT named Muhammad from claiming to be the Mahdi), his birth being preceded by the appearance of a comet and both solar and lunar eclipses during Ramadan, and his face appearing on the Moon. Now that’s some quality advertising! Jesus also puts in a major appearance, but at first he’s basically second banana to the Mahdi. He’ll show up in Damascus, and help the Mahdi to battle against Masih ad-Dajjal, who’s basically the Antichrist. This major villain of the piece, the thirtieth in a line of deceivers, will have curly hair, only one eye, and the word Kufr (Arabic for “disbelief”) on his forehead. Only believers will be able to see this last item, though. 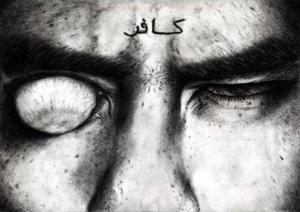 He’ll ride on a giant white donkey, with every tooth sixteen inches ’round. Or maybe I’m thinking of Old Joe Clark. Anyway, he’ll deceive a lot of people, but then Jesus will kill him with a spear. Strange how everyone thinks Jesus, who was previously all about turning the other cheek, will be totally warlike in his next appearance. I call that character inconsistency!

After the Mahdi has ruled from somewhere between seven and nineteen years (the exact figure varies in different interpretations), Jesus will begin ruling himself, and turn the whole world to Christianity. No, wait, that’s Christian eschatology. I mean to say he’ll turn the whole world to Islam. Or possibly Elvis worship. There’s really no telling what that crazy cat will do next. After forty years, he’ll die, which is kind of weird as Muslims generally believe he DIDN’T die on the cross. Finally, there will be a general resurrection of the dead, with Muhammad coming first, and everyone will be judged just as they are in the Bible.

Obviously not all Muslims hold to these exact beliefs, and many think they’re symbolic of larger truths, just as some Christians do about Revelation and other Biblical apocalypses. I’ve also seen it mentioned that Shiites think it’ll be the Twelfth Imam who kills Masih ad-Dajjal, rather than Jesus. And I’m not sure how much of this comes from the Quran, how much from the Hadith, and how much was just made up by people who have no known connection with Muhammad. As a story constructed from various elements, though, it’s not bad. It basically takes Revelation and expands on it, adding some interesting new details, and obviously adherence to a different religion. Personally, though, I’m still counting on Ragnarok.