Storks appear from time to time in the Oz series and related books. In Dot and Tot of Merryland, the third valley is where white storks take care of babies, which drop into the valley in blossoms. In order to keep the place from becoming overcrowded, they fly the babies into the world outside Merryland, delivering them to adults. Obviously the basis for this is the myth that storks deliver babies, which everyone knows about but I have to wonder how many children have ever really believed. It’s really just a creative dodge and way to curb childish curiosity anyway, isn’t it? Now that it’s more common for children to know where babies really come from, are storks losing their jobs? Maybe that’s the real reason why sex education is so controversial. Won’t somebody PLEASE think of the storks? Anyway, as I like to know the backgrounds for myths, I did a quick Google search on the stork myth, and it looks like there are several possible reasons why storks became known as baby bringers. They have long been considered symbols of fertility and fidelity, as well as bringers of good fortune. (This was back when having a baby was viewed as good fortune, you see.) Storks were traditionally considered to be monogamous, and while this is not actually true, they are known to return to the same nesting spot year after year and take good care of their young. They’re also migratory, adding credence to the notion that they could be bearing mysterious cargo from far away. Storks tend to arrive in northern Europe near the end of March and perch on rooftops, which is considered lucky, despite the fact that they’re probably pooping up there. The story as it developed says that the storks find unborn babies in caves and swamps, and then deliver them to expectant parents. This page makes a point of how storks would nest in Germany and Poland nine months after Midsummer. Does this mean that a lot of people in those countries had sex at Midsummer?

Anyway, while the baby-delivering storks are part of the greater Baumian mythology, they’re never mentioned in the Oz books themselves. There are storks, however, including the ones that sometimes pull Glinda’s chariot. Also, in the very first Oz book, a stork rescues the Scarecrow from being stuck on a pole in the river, representing a sort of rebirth. She also mentions having children of her own.

While her appearance is a bit part, she still plays an occasional role in apocryphal books. Peter Clarke’s A Small Adventure in Oz begins with the stork, whose name is Stella, accusing a stockman named Stakstuk of stealing sticks that she intended to use for her nest. Dennis Anfuso’s A Promise Kept in Oz names the stork Herrona, and has her requesting a promised favor from the Scarecrow. And in Bill Campbell and Irwin Terry’s Lavender Bear, she shows up as the leader of a contingent of storks from Merryland. I don’t know of this particular stork appearing anywhere else, but that doesn’t necessarily mean she doesn’t. Also, going slightly outside Oz again, Princess Truella of Mo rides a giant white stork to Maetta’s castle in The Magical Monarch of Mo. 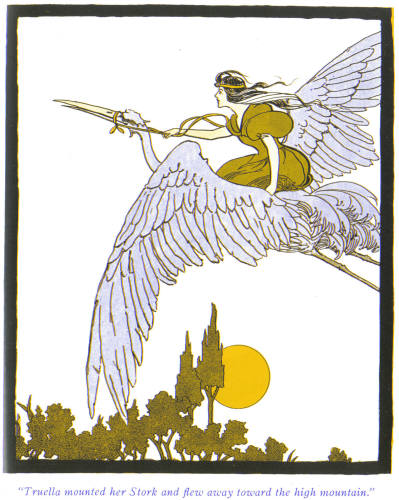