Armageddon: The Musical, by Robert Rankin – The third Rankin book I’ve read and the fifth he wrote has yet another plot with apocalyptic themes. The intentionally and comically complicated story involves the planet Phnaargos, where the events on Earth make for a popular television program. Ever since the Nuclear Holocaust Event in 2000, however, people on Earth don’t do much other than watching TV themselves, which isn’t very entertaining. Even the leaders of the major world religions have their own TV shows. One of the Phnaargs has the idea to go back in time and make Elvis dodge the draft, which he hopes will prevent nuclear war and save the ratings. As it turns out, however, Elvis ends up journeying into the future and helping the main protagonist Rex Mundi and Jesus’ sister to fight the Antichrist. I guess Rankin beat Bubba Ho-tep to the idea of Elvis as action hero by over a decade. As with the other Rankin books I’ve read, it’s full of meta-humor and ridiculous plot twists. As the alien Fergus Shaman puts it, “There’s always a logical explanation if you are prepared to stretch credibility far enough.” 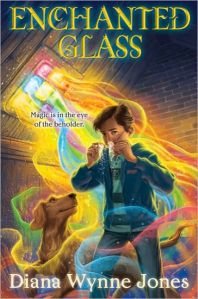 Enchanted Glass, by Diana Wynne Jones – I believe this is the last of Jones’s books to be published within her lifetime, although there’s another due to come out this year. The story takes place in a world that’s basically ours, but with magicians. When Andrew Hope inherits his wizardly grandfather’s house and field-of-care, he has to learn how to use magic to protect the area. He also has to contend with Oberon and other fairies, who are after his ward Aidan. It’s an enjoyable tale, with a good mixture of fantasy and a slice of life. I notice that quite a few of Jones’s books feature households, often those of magicians, brought together by strange circumstances.

1 Response to Elvis and Oberon