Most of the great video game heroes have their own enemies they have to face over and over again, trying to foil their dastardly plans. And when the hero in question is a blue hedgehog who’s apparently amped up on caffeine, what better villain than a fat scientist with a crazy mustache?

Okay, I guess there’s no real logic as to why those particular characters are locked in eternal struggle, but it makes as much sense as an Italian plumber fighting a fire-breathing turtle, right? 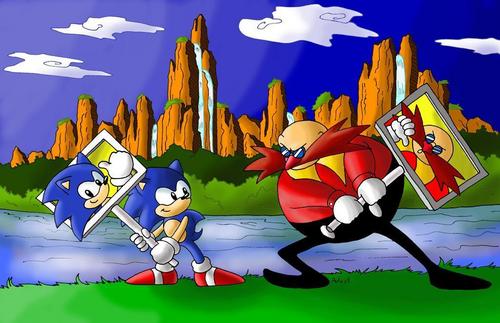 The main villain of the Sonic the Hedgehog games was known in Japan as Dr. Eggman, referring to his shape. In English, however, he was Dr. Ivo Robotnik, which sounds more like a name. “Robotnik” was apparently a name used by socialists in Poland in the late nineteenth century, with the “robot” part coming from an old Slavic word for “slave.” In 1921, Czech author Karel Čapek used the word to refer to mechanical workers, and the word “robot” is now standard for such machines. So does that mean Ivo Robotnik is Polish or Czech? Technically, I guess he would be Mobian.

More recent Sonic games have taken to calling him Eggman in English as well, much as Princess Toadstool is now Princess Peach. I have to say I prefer “Robotnik,” and programmer Yuji Naka has explained the discrepancy by saying that “Eggman” is really a nickname. His appearance is based partially on Theodore Roosevelt, and he’s intended as a character that children could easily draw.

Robotnik’s ultimate goal is to conquer the world of Mobius, and to that end he has an army of his own robots, plus machines to turn cute little forest creatures into robots. It’s up to Sonic to save the adorable animals from becoming mechanized. As such, the Sonic series sort of has a theme of nature staving off technology, although wouldn’t Sonic’s sneakers also count as technology?

Picture source
Or do they grow wild on Mobius? Regardless, Robotnik is a megalomaniacal genius (various websites report that his IQ is 300), but can also be quite immature when his plans are thwarted. He doesn’t seem quite as classy as his fellow evil scientist and video game villain Albert Wily, although to Ivo’s credit he probably doesn’t spend as much time begging for forgiveness.

9 Responses to Eggman Over Easy