Picture by Bernd/Dark Diddy Kong
I’ve written about Wart, the main villain from Super Mario Bros. 2, a few times, including here and here. From what I’ve heard, although the original stars of Doki Doki Panic were essentially commercial mascots, all of the enemies were original with Nintendo. So why they decided the Arabian family should fight a giant frog, I couldn’t say. Since the game originally was supposed to take place inside a storybook, I have to wonder if it was a play on the idea of the Frog Prince. After all, Wart is a frog dressed in a crown and royal robe. As far as we know, though, he’s not a human under enchantment. Perhaps he’s related to Prince Froggy from Yoshi’s Island, a more direct Frog Prince reference.

And don’t forget about Frogfucius, another giant talking frog, this time from Super Mario RPG.

While there are seven worlds in the game, the original Doki Doki Panic had only four main bosses, counting Wart himself. Mouser showed up three times and Triclyde twice. When converted into a Mario game, a new boss, Clawgrip, was added. The Game Boy Advance remake throws in yet another main boss, Robirdo. I’ve already written a post on Mouser, but here’s a look out the others:

Triclyde – Spelled “Tryclyde” in the game’s credits, but they have a lot of errors, and I think “Triclyde” is more appropriate for obvious reasons. As a three-headed snake, he appears to have been inspired by the Hydra from mythology, although it’s unknown if he would grow more heads if the current ones were cut off.

Mario tends to prefer attacks with blunt objects instead of sharp ones. Triclyde also breathes fire, and I believe I’ve sometimes heard versions of the Hydra myth that had it breathe fire, but it’s more common for it to simply have poisonous breath. I guess Triclyde counts as the first boss monster to be a larger and more powerful version of a common enemy, in this case the Cobrat.

Picture by Mr. Goggles
In the Super Mario Bros. Super Show cartoon, he’s portrayed as pretty dumb, and in one episode Bowser says he has to tell the serpent everything three times. I guess in the cartoon, he shares one brain between the three heads, or something like that. Also, since ’tis the season, I might as well mention that, in the Christmas-themed episode “Koopa Klaus,” he played the role of Randolph the Red-Nosed Triclyde.

Fryguy – Not to be confused with the pom-pom things from the McDonald’s commercials, Fryguy is a creature of living fire, who for some reason has his base in the ice world.

Somehow, neither he nor his fireballs ever melted any of the ice. In the Nintendo Comics System, there were multiple Fryguys, and one story had King Koopa planning to make more by throwing Toads into volcanoes. Fryguy did appear on the Super Show, but not to the extent of Mouser or Triclyde. I’m not sure what they were going for with his voice in Super Mario Advance, but it reminds me a bit of Heat Miser from The Year Without a Santa Claus.

Or maybe they just wanted to get across that he was flaming.

Clawgrip – Even though he debuted in the American version of the game, his name in the credits was still badly translated from Japanese. Go figure. He’s a giant crab who throws rocks, but Super Mario Advance adds some extra back story by making him a small crab enlarged by Wart’s magic bubbles. In fact, his initial form is that of a Sidestepper, one of the crab enemies from the original Mario Bros.

He appears in a few nautical-themed episodes of the cartoon, but never has a speaking part, at least as far as I can remember. In SMA, he speaks in a stereotypical pirate voice, which actually fits with his always being shown wearing a blue bandana on the show. 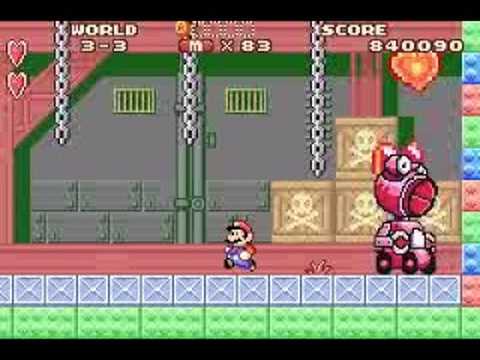 Robirdo – Only appearing in the Game Boy Advance version, this boss is a giant robotic Birdo that spits giant eggs, and has a few other attacks as well. I’m not sure who in Subcon had the ability to make a fully functioning robot, but strange things happen in the Land of Dreams. Speaking of which, when games are remade, I have to wonder whether the changes count as canonical. Should we assume Mario and the others took on Robirdo way back in the time of SMB2? I guess it doesn’t really matter, but I’m curious.

As usual for these Mario posts, most of the information comes from the Super Mario Wiki. Also useful was this YouTube video of the bosses in SMA.