Working on the Clockwork Plan

If you’ve read Tik-Tok of Oz, you may have noticed that a good portion of the plot seems recycled. Basically, the main reason for this is that the book is largely the novelization of a stage play, which in turn was based on elements from earlier Oz books. From Ozma of Oz came the character of Tik-Tok as well as the basic plot structure, with a girl washing up on shore after a shipwreck and trying to rescue a prisoner of the Nome King, and the small army with only one private. Not much of Dorothy and the Wizard appears in it, but that is the source for a princess being picked from a bush. And from Road came the Shaggy Man, the Love Magnet, and Polychrome. Since the stage play wasn’t intended to be part of the continuity of the books, L. Frank Baum was free to mix up earlier plots and characters. The result was Ozma of Oz, with the title later changed to The Tik-Tok Man of Oz, possibly because Tik-Tok was a more interesting character to put in the title. Also, while there is AN Ozma in the play, it isn’t THE Ozma. Anyway, a draft of the libretto from when it was still called Ozma has been put up on the Internet, and in many ways it is quite close to what would eventually become the book Tik-Tok. As many people have suspected, the rather direct transition from play to novel explains many of the oddities in the book, like why the Shaggy Man doesn’t immediately recognize Polychrome and Tik-Tok.

Similarly, it’s likely why the Nome King has a different name and title this time, Ruggedo the Metal Monarch. Perhaps because it became the third book with the Nome King as the villain, his defeat was considerably grander in the book. There’s no trace of the Great Jinjin or the dragon Quox in the play, but I’ve seen it proposed that he was likely inspired by the mechanical dragon in stage performances of Wagner’s Ring Cycle. It’s certainly not outside the realm of possibility that Baum wanted to put a dragon in the play but lacked the budget, and therefore stuck him into the novel instead.

Tik-Tok is also particularly heavy on vaudeville-style humor, much of which also comes from the script. I did notice that, while Baum kept in a lot of the puns, he left out many of the topical references, possibly because he realized the play could be changed while the book was likely to remain the same way after those references were no longer relevant. What’s kind of odd is how many lines of dialogue come from the play, but with a cheap joke omitted. For instance, in Act I, Scene 3 of the script, Shaggy informs Queen Ann that the Metal Monarch “[o]wns all the metal in the world–gold, silver, copper, iron, politicians, radium, tin, life-insurance agents and brass.” In the book, he has a similar line: “He owns all the metal that lies underground—gold, silver, copper, brass and tin.” And speaking of jokes being removed, Tik-Tok comes across as much more comically clunky in the play. In the books, he is a bit jerky and has to be wound up to function, but he doesn’t run down anywhere nearly as often as in the play. The script also has a running gag where Tik-Tok misquotes a common phrase, and when corrected, says to “blame the patentee.” The book of Tik-Tok presents a more consistent characterization with what we’d seen in previous volumes. 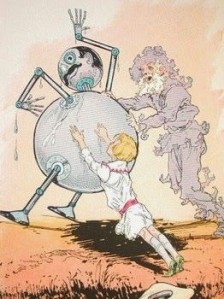 It does, however, incorporate the stage Tik-Tok’s habit of repeating “Pick-me-up!” after falling down, which interestingly also appeared in the movie Return to Oz. I suspect the screenwriter for the film must have read Tik-Tok, and the reference to Tik-Tok as “Royal Army of Oz” adds credence to this. Tik-Tok is never the Army of Oz (that’s the job of the Soldier with Green Whiskers), but he IS the Army of Oogaboo in Tik-Tok. Another strange scene from the play involves Betsy (known as Betsy Baker in this draft of the script, but later called Betsy Bobbin, which is actually a name from a nursery rhyme) getting hold of the Love Magnet and Shaggy and Tik-Tok getting into a duel over her, during which Shaggy presses the mechanical man’s self-destruct button. Ruggedo eventually puts Tik-Tok back together again. Obviously this bit didn’t appear in the book, but there is a similar occurrence in the Little Wizard Story “Tik-Tok and the Nome King,” in which Ruggedo breaks Tik-Tok and Kaliko reassembles him. The King’s reaction to seeing the restored copper man is much the same as Shaggy’s in the play.

If I may mention one final oddity about the script, it’s that Betsy initially arrives in the Rose Kingdom with both Hank the Mule and a chicken named Baden-Baden, but after the first scene the chicken disappears entirely. I have to wonder if Baum introduced the chicken with the intention of incorporating the Nome King’s fear of eggs into the plot, but later decided against it, and forgot to edit out the mentions of Baden-Baden in the first scene. Eggs do come into Ruggedo’s defeat in the book, but a chicken doesn’t.

I have no idea whether Baden-Baden made it into any actual performances of the Tik-Tok Man play, but I suspect she didn’t.

4 Responses to Working on the Clockwork Plan