I’m Not a Real Doctor, But I Am a Real Mario

While Mario is primarily a plumber, he’s worked other odd jobs throughout his career, including a construction worker, a destruction worker, and a boxing referee. Mind you, at this last one he’s either corrupt or just inept, as he counts faster when it’s Little Mac who’s been knocked down.

Still, these aren’t jobs that require a whole lot of particular training. I know some plumbers also work on heating and refrigeration systems, but so far this has yet to make it into a game, as far as I know. No, what gets me is that Mario is apparently also a doctor.

When would he have time to go through medical school when he’s busy rescuing princesses and saving kingdoms? I find it unlikely that he even has a PhD, which would technically mean he’d be allowed to call himself Dr. Mario. 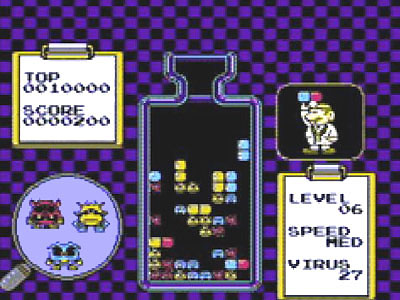 Yet this is the role he plays in a Tetris-like game that has him throwing pills at comically rendered viruses, with Princess Peach as his nurse.

I doubt she has the necessary education either, but who’s going to argue with royalty? If kings can cure tuberculosis merely by touching people, then I guess a king’s daughter can serve as a nurse. I really don’t think Dr. Mario is licensed by any medical board, but I guess we don’t know for sure what qualifications you need to become a doctor in the Mushroom Kingdom.

There was actually a Nintendo Comics System story explaining that Mario was basically forced into the position by the Princess and a scatterbrained doctor, which I guess makes as much sense as anything.

By the way, the viruses make a return appearance in Mario and Luigi: Superstar Saga, in which the brothers fight them at Woohoo Hooniversity.

3 Responses to I’m Not a Real Doctor, But I Am a Real Mario