In Sky Island, we’re first introduced to Button-Bright‘s Magic Umbrella. This is an old and tattered-looking umbrella with a red elephant’s head on the handle, that has been in his family for generations. The family considers it to be lucky, and says that it was passed down from a distant ancestor who was an Arabian night. It’s also in this book that we learn Button-Bright’s real first name is Saladin, which might suggest a link to the Crusades. Anyway, Button-Bright learns that the umbrella has magical powers that will only work for members of his family, being able to fly its bearer anywhere they ask. There’s no way to stop it once it’s started, however, so it has to reach its destination before you can give it another command. Its speed is pretty great, as shown in its ability to cross the United States in hardly any time. We also learn that the elephant head has the power to turn into an actual elephant in emergencies.

In the story, Button-Bright uses the umbrella to travel to California, and then accidentally takes Trot and Cap’n Bill to Sky Island. 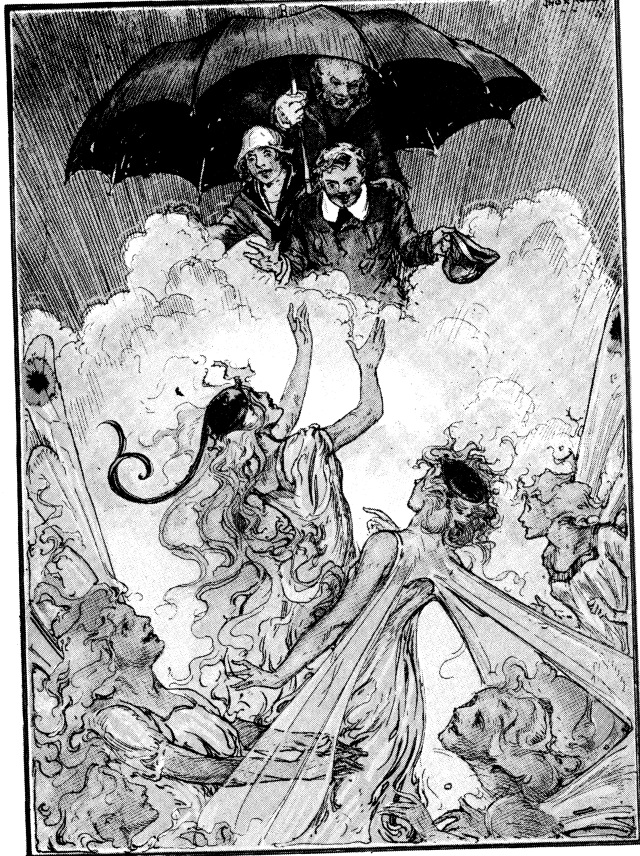 When the boy reappears in The Scarecrow of Oz, turning up in Mo in a patch of popcorn snow, he claims to have lost the umbrella. Whether this means he lost it in the snow or somewhere else isn’t entirely clear, but he doesn’t give any impression of wanting to look for it. This means that what happened to it remains a mystery.

There are many umbrellas throughout the Oz series, some of them magical, like the ones on Umbrella Island. Perhaps the most noteworthy in this respect, however, is the one owned by the Red Jinn. When Jack Pumpkinhead meets Jinnicky, the Jinn says that his magic umbrella could take the Pumpkinhead back to Oz, but he needs it himself. Jinnicky takes an umbrella along in Purple Prince and Yankee, and in the latter we learn that it has the power to expand and to ward off the stones thrown by the giant Badmannah, but there’s no indication as to whether this one has transportation powers. 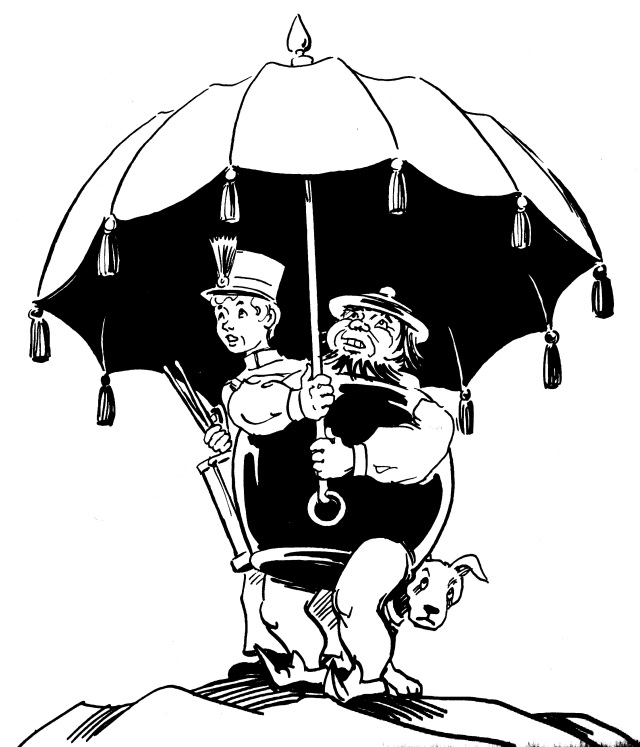 Maybe it does and he just sees no need to use them, or perhaps he owns more than one umbrella with magical properties. Regardless, is there a connection to Button-Bright’s umbrella here?

The Magic Umbrella has appeared as a plot device in a few different apocryphal Oz stories. In March Laumer’s Umbrellas, for instance, it’s revealed that a witch named Jrumm stole it while Button-Bright was in Mo. Eventually, he’s able to find it again. In Wonderful Journey, written by Atticus Gannaway back when he still went by his first name, Button-Bright has the umbrella back but there’s no indication as to how. During the story, the Wizard of Oz devises a way to use it for time travel, which comes up again in the aptly titled follow-up Time-Travelling. Wonderful Journey also offers an explanation for the origin of the umbrella, saying it was created by the magician Nbrgk, who was killed by Arabian knights in the eighteenth century. As with much of the book (which was, after all, written by a child), I think this explanation has potential but probably isn’t telling the whole story. In Jeremy Steadman‘s Emerald Ring, Button-Bright finds what he thinks is his old umbrella, but this one can talk, and explains that it’s actually a cousin of the other umbrella. This umbrella can also stop before reaching its destination, suggesting that it might be an upgrade. I think it’s quite possible that Nbrgk crafted several of these in his lifetime. I went with the idea of Jinnicky’s umbrella being one of these related ones in my own “Gone with the Hurry-Cane,” as shown in the fact that it has a camel’s head instead of an elephant’s as the handle decoration. How Jinnicky met the umbrella-crafting magician is a story I have largely worked out, but haven’t yet committed to writing.