Looking back at this Chick Tract dissection, I thought that Jack Chick’s obsession with Semiramis might be worth a post. So who’s Semiramis? And is she related to Harold Ramis, who played Egon in Ghostbusters? I don’t know about the latter, but Semiramis was an actual historical figure, the wife of Shamshi-Adad V of Assyria. A more accurate representation of her name is Shammuramat, but like many other historical and mythological figures, it was through her Greek name that she is primarily known today. Anyway, after her husband died, she served as regent for their young son, and hence was in charge of the Assyrian Empire from 810 to 806 BC. I get the impression that her fame might simply have been due to the fact that nobody knew the names of most other Assyrian queens. As such, many landmarks in the Middle East came to be named after her, including the Hanging Gardens of Babylon and the artificial banks of the River Euphrates. Much of the legend of Semiramis was written by the Greek historian Diodorus Siculus, who lived in the first century BC. According to his account, she was the daughter of a fish goddess, and was fed by doves until being adopted by a shepherd. When she grew up, she first married a soldier, but was later seduced by Ninus, the legendary founder of Nineveh. It was typical in Greek mythology to credit the founding of cities and kingdoms to legendary founders like Ninus, but he wasn’t a real person. She ruled as regent after Ninus died, so there is a bit of the actual Semiramis in the mythical history. Chick’s ideas about Semiramis can be traced back to a more recent source, a nineteenth century Scottish preacher named Alexander Hislop. In 1853, Hislop wrote a pamphlet that he later expanded into a book, which claimed that Semiramis was the consort of Nimrod. After Nimrod died, she claimed that her baby was Nimrod reborn. Semiramis eventually became the source of pretty much every form of goddess worship in the world. Hislop’s main goal in this rather fanciful account seems to be simply to cast suspicion on Catholics, claiming that the Catholic idea of the Virgin Mary is really just Semiramis worship in another form. 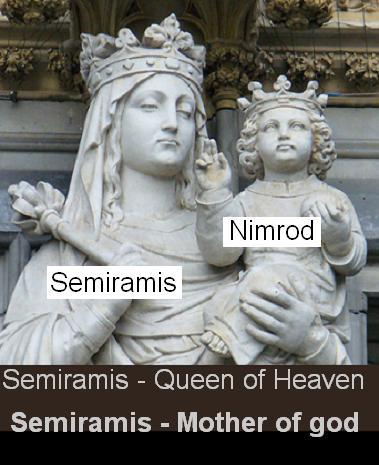 It’s not too surprising that Chick, who is fervently anti-Catholic and quite eager to latch onto conspiracy theories, would have picked up on this.

I don’t doubt that the Catholic emphasis on Mary was influenced by goddess worship, but it’s not like the Protestant denominations are free from pagan influence either. It amazes me how eager people can be to attack other people’s religions without bothering to use the same standards on their own. Besides, archaeological evidence suggests that fertility goddesses were worshipped long before Semiramis’ time. But I guess you’re not going to accept that if you think God has to be male, so let’s just blame it all on Nimrod.

2 Responses to Semiramis Kind of Life