The Succubus and Incubus Omnibus 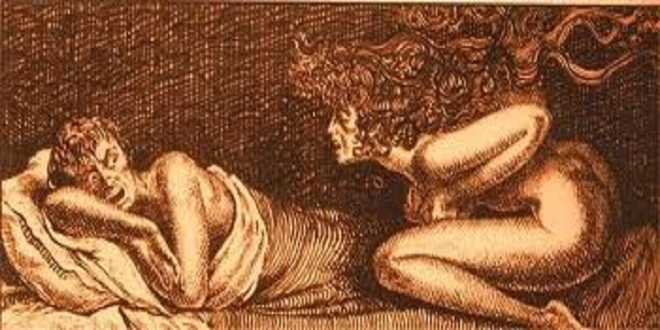 Some stories have the demons being capable of fathering or bearing children, and Gilgamesh and Merlin have both been identified as the offspring of a woman’s encounter with an incubus. The infamous Malleus Maleficarum has it that a succubus collects human semen to give to incubi for fathering children with human women, because they’re normally infertile. Even a Wikipedia editor, however, wonders why human semen inserted into a human female wouldn’t simply result in normal human children. This page reports that children born with deformities were sometimes thought to have been the offspring of demons. Even today, people will sometimes report having had sexual encounters with demons while sleeping. It appears that the general explanation for this is sleep paralysis, which also leads to accounts of alien abduction. And really, what are abducting aliens but demons transferred into the realm of science fiction?

One particularly interesting tale of an encounter with a succubus is that of Pope Sylvester II. As reported on this page, Gerbert of Aurillac made a deal with a succubus named Meridiana, who promised him wealth and power if he would remain faithful to her. Eventually, with her help, he worked his way up to Pope. What’s weird about this story is that Gerbert doesn’t seem to have suffered any real consequences from making a deal with a demon, and the story even says that Meridiana forgave him when he had an affair with another woman who had rejected him earlier. Granted, Sylvester did die while conducting a mass in Jerusalem, as Meridiana predicted, but I don’t know that that would count as punishment because that’s probably the way a pope would want to go. So we have a demon who’s not only true to her word, but forgiving even when Sylvester violated his contract? Maybe Meridiana was just lonely. This isn’t the only story told of Sylvester having been involved with demonic forces, however.

He was commonly rumored by enemies to have been a sorcerer who achieved his high position through dealings with the Devil, and legend gave him a head made of bronze (not on his own shoulders, mind you) that he used for oracular purposes. He wasn’t the only pope to have been accused of sorcery, but some have theorized that in his case the accusations can be traced to his interest in science. Because obviously scientists are in league with the Devil, right?

By the way, if you’re trying to summon a succubus, make sure you don’t end up with a neuralger instead. According to Terry Pratchett, that’s a demon that comes and has a headache at you.

5 Responses to The Succubus and Incubus Omnibus