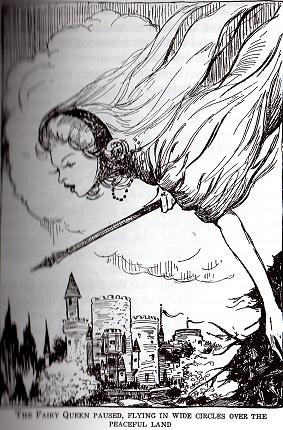 As a follow-up to last week’s post on Oz timeline issues, here’s another one, dealing with Lurline‘s enchantment. We know from The Tin Woodman of Oz that the Fairy Queen enchanted the country to make it a fairyland, and left one of her fairies there to rule. In Glinda, the Supreme Dictator of the Flatheads says that this fairy was named Ozma, and hints that it might be the same as the Ozma standing before him without specifically saying so. Since we know that earlier rulers of Oz were also named Ozma, however, she might not actually be the same. Whether or not it was the same Ozma is likely significant in determining the time period in which the enchantment took place, because Ozma was a baby when the Wizard of Oz took her to Mombi. While it’s not impossible that she was a baby for several centuries, it strikes me as unlikely. In Jack Snow’s Magical Mimics, the enchantment happens concurrently with Lurline leaving the baby Ozma with the King of Oz. I’ve seen it stated that Snow indicated this happened 200 years before the time of the story, but I don’t know that he specifically does. Ozana, who was left as a guardian on Mount Illuso after Lurline left Ozma in Oz, doe say she has been on the mountain for over 200 years, however. So that’s one possible date for the enchantment, although even that means a period of at least a century in between Ozma being left with the king (presumably Pastoria) and her falling into Mombi’s hands.

In his Unexplored Territory in Oz, Robert Pattrick assumes that the enchantment was responsible for all magic in Oz, an idea I don’t know that I can buy. Edward Einhorn does use it to pretty good effect in his Paradox, however. Obviously, this would mean the enchantment would have to have taken place really far in the past, as there are references to magic having worked in ancient Oz. Jeremy Steadman’s Emerald Ring has the enchantment occurring over 2000 years before the story’s present, revealed elsewhere to be the year 1919. Marcus Mebes’ Lurline and the White Ravens suggests an even earlier date, although it’s not specified. One particular time period that is popular for when Oz was enchanted is around 1200, due to references in Yellow Knight to some Ozites being seven centuries old. This is a Ruth Plumly Thompson book, and Thompson never actually mentions the enchantment, but it the figure of 700 years might well be important. Thompson says that some Samandrans are about 700 years old, and that Sir Hokus of Pokes is as well. But why 700, and not older than that? Since the enchantment was supposed to have ended death and aging in Oz, that’s certainly a strong possibility. Then again, we also see references to Ozites dying much more recently than the thirteenth century. It’s been suggested that the enchantment either took a while to take effect throughout the country, in which case it must have affected Samandra early on, or the Sultan or someone else augmented it with their own magic. Another theory I’ve seen come up from time to time is that the enchantment was temporarily weakened or suspended for some reason. As someone who likes to use various sources from inside and outside the canon, I’m pretty much stuck with the idea that Lurline made several different visits to Oz, and worked a few different enchantments. This means that the bit in Tin Woodman about the Fairy Queen forgetting all about the land must not be accurate. Or perhaps she forgot and then remembered again later. Regardless, the fact that we can’t even pin down a millennium for the enchantment, let alone a more specific time period, is a major impediment to the creation of a working Oz timeline.

7 Responses to Lurline When?