Fall of the House of Random

Back in the mid-eighties, perhaps to tie in with the release of Return to Oz, Random House published a series of Baum-consistent Oz books intended for younger readers. When I say they’re Baum-consistent, they do contain several mistakes, but this is clearly a book-based Oz rather than a movie-based one. There were five books total, all set back when Dorothy was still living in Kansas. The reason for this might well have been a copyright issue, since I’m not The Emerald City of Oz was in the public domain yet. Anyway, here are my reviews of the three I’ve read:

Ozma and the Wayward Wand, by Polly Berends – The son of Ozma’s royal gardener sneaks into the palace to steal the fairy ruler’s wand, and accidentally uses it to cause all sorts of disasters. I can’t say much for the plot, which is resolved very easily, but the author generally does well by the existing characters. One oddity is that Dorothy knows how to swim and says she’ll teach Ozma, while in Patchwork Girl Dorothy still can’t swim. Also, the Nome King’s tunnel is present, when it shouldn’t be prior to Emerald City.

Mister Tinker in Oz, by James Howe – While I haven’t read any of this author’s other work, I’ve at least heard of him; he was the guy who wrote the Bunnicula series. In this book, easily the best of the three, we pick up on the story of one of Tik-Tok’s creators. Mr. Tinker, who had departed Ev for the Moon, travels to Oz in Dorothy’s company. Again, not that much plot, but I like the character of Mr. Tinker, and his inventions are clever. Incidentally, Howe’s full name for the inventor is Ezra P. Tinker. In Jim Vander Noot’s “Button-Bright and the Knit-Wits of Oz,” his partner is named Rejano Edison Smith. Maybe Tinker’s middle name could also be that of a real-world inventor. Ezra Pascal Tinker, perhaps? 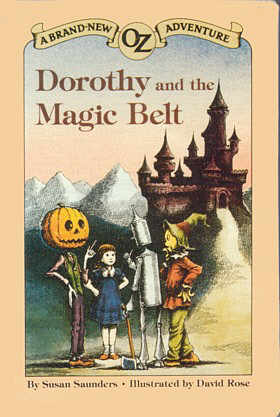 Dorothy and the Magic Belt, by Susan Saunders – This one plays quite loosely with existing continuity, which is admittedly spotty already, but I think the author could have been a bit more careful. First, we have Dorothy being transported from Kansas to Oz right in front of Aunt Em and Uncle Henry, even though they don’t believe in Oz at the beginning of Emerald City. Also, Mombi is transformed into a child, yet is still an old lady in Ruth Plumly Thompson’s Lost King. There are some ideas I like here, though. Dr. Nikidik’s son, Nikidik the Younger, uses a powder to turn everyone in the Emerald City into children so that he can steal the Magic Belt. The youthened Ozma turns back into Tip, and Mombi regains her magic because she hadn’t forgotten it at her younger age. Chris Dulabone tried to resolve the continuity issues in this book with his own Dagmar by telling how Mombi regained her old form, but the explanation is rather convoluted out of necessity.

3 Responses to Fall of the House of Random