While not every Popeye cartoon uses Bluto, the big bully is an integral part of the series, which usually focuses on the love triangle between the two of them and Olive Oyl. Why they both want her I’m not sure, but there you go. Actually, the dynamic between them does change a bit, usually without any explanation. Sometimes Olive is totally resistant to Bluto’s advances, while other times she seems equally interested in both men and only goes for the one-eyed sailor because he’s the last man standing.

There are even occasions where Bluto doesn’t appear interested in Olive at all, and pummels Popeye for some other reason.

As with most elements of the Popeye universe, Bluto originates with the King Features comics by Elzie Segar, but he appeared in only one story. From what I’ve been able to gather, the 1932 story is called “The Eighth Sea Adventure,” and Bluto is an enormous pirate who fights Popeye over the course of two weeks of strips. When the Fleischers brought Popeye to the big screen in the following year, they brought in Bluto as his nemesis. This Bluto incorporated traits from some other characters in the strip, and it’s thought that the love triangle was inspired by that with Popeye, Olive, and Harold Ham Gravy. What I find interesting is that Popeye and Bluto in the cartoons are usually pretty evenly matched, despite Popeye’s puny figure (one of Bluto’s favorite insults for him is “runt”). They’re both working-class brawlers, and generally both sailors as well. One element I recall from the short-lived Saturday morning cartoon Popeye and Son that I didn’t like even as a kid was how they made Bluto and his family rich; that he and his enemy were in the same socioeconomic class strikes me as significant in how they interact. How powerful the two of them are respectively varies a bit, with Popeye sometimes doing quite well against him even before eating spinach, and other times being no match without the vegetable. Speaking of which, we occasionally do see Bluto taking the initiative and either stealing or sabotaging Popeye’s spinach. One cartoon from the Famous Studios era that I particularly remember is “How Green Was My Spinach,” in which Bluto plays mad scientist and tries to destroy the world’s spinach crop.

Of course, Popeye does win in the end, thanks to some meta-humor, but I have to wonder what Bluto would have done if left to his own devices. I guess eventually he would have had a lawsuit slapped on him by the Spinach Growers of America. Incidentally, I thought of this cartoon in particular during the tainted spinach outbreak a few years ago. For the most part, though, I think Bluto lets Popeye get the upper hand in the end because he’d be bored otherwise. Take a look at the 1940 Fleischer cartoon “Fightin’ Pals” for a good explanation of this.

Not only do the two miss each other when they’re apart, but Bluto actually gives Popeye spinach so the two can keep brawling! In some ways it seems like the bond the two have with each other is stronger than what either one has with Olive. 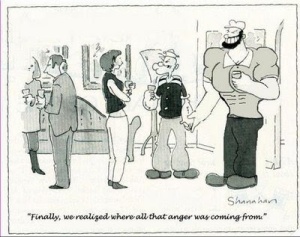 Finally, we get to the elephink in the room that is Brutus. Why does what appears to be the same character sometimes have a different name? The explanation I’ve seen is that it has to do with copyright. In the sixties, after Famous Studios had stopped making Popeye cartoons, King Features made some of their own. The problem was that they weren’t sure who owned the rights to the name Bluto. As it turned out, King Features would have had no problem using it, as Bluto had appeared in the comics. Not being sure, however, they instead used the name Brutus, which does have a few things going for it. It emphasizes the fact that he’s a brute, and references one of history’s most famous backstabbers.

Later cartoons went back to using Bluto, but the comics went ahead and made the two of them different characters. They’ve apparently been established as brothers, and there was one story in which Popeye fought various versions of both Bluto and Brutus. So I suppose that makes at least three guys who are interested in Olive, four if you count Ham Gravy. It’s not like they’re exactly lookers either, though.