As we are now living through the dog days of summer, this week’s mythology post will be about dogs. More specifically, it’s about Laelaps, a magical hunting dog given by Zeus to Europa when he seduced her and carried her off. He was passed down by the rulers of Crete, and eventually found his way into the care of Prokris of Athens when she cured Minos of Crete of a curse by Hera that made him ejaculate spiders and scorpions. This dog had the power of always catching the prey he sought. Meanwhile, in Thebes, a creature known as the Teumessian Fox was terrorizing the countryside, and even eating people. Every thirty days, the people of Thebes would leave out a child as a sacrifice to the fox. The beast was sent by the gods as punishment for some unknown crime committed by the Theban house of Kadmos, and was fated never to be caught. That didn’t stop people from trying, however. Eventually, Prokris’ husband Kephalos agreed to have Laelaps hunt the fox.

As the dog always caught its prey and the fox could never be caught, Zeus foresaw an eternal chase, and turned the two into stone to resolve the paradox. Either that or he turned the two canines into constellations, specifically Canis Major and Minor. 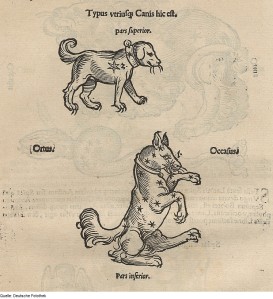 And since Sirius, the brightest star in our night sky, is in Canis Major, that more or less brings us full circle. It is, after all, Sirius for which the dog days are named. Laelaps, by the way, is also a kind of parasitic mite, and was once another name for the dinosaur now called the Dryptosaurus.