When looking for information on Mushroom World geography, I came across this post on the extent of the Princess’ power. We see quite a few rulers throughout the games: Princess Daisy, Queen Bean, King Fret of Jewelry Land (the setting of the game packaged with the Super Scope for the Super NES), King Nimbus, Princess Eclair of the Waffle Kingdom, and of course the seven kings in Super Mario Bros. 3. The post’s suggestion that the SMB3 kings are essentially vassals to the Toadstool crown seems likely, and even has support from the SMB3 cartoon show. In the episode “Life’s Ruff,” Luigi goes to see King Windbag of Iced Land because the Princess had heard reports of his being a bully. If she didn’t have a certain amount of control over Iced Land, how would this make sense? Granted, a lot about the cartoons doesn’t make sense, but this particular bit could work if we see Peach as a ruler over rulers. For that matter, the Super Mario World cartoon had her pretty much taking control in Dinosaur Land without any real reason for it. I wonder if the Yoshis have their own government. In the cartoon, Yoshi is just a kid, but the comic in Nintendo Power identified Yoshi as head of the Chamber of Commerce. Is Peach undermining the existing power structure in the prehistoric principality? And what about how Mario has his own country? I’m thinking this was a gift from the Princess, although there may be reasons to think that Mario is himself related to royalty. 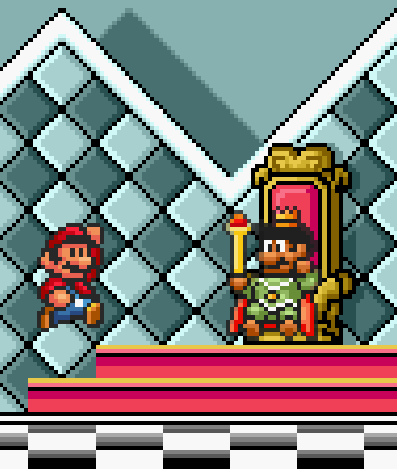 We don’t really know where the borders of the Mushroom Kingdom are, anyway. Turning back to the Super Mario RPG map for a minute, a town in the northeast is labeled “Mushroom Kingdom.”

As far as I can recall, though, only Bowser’s domain and Nimbus Land appear to have their own separate rulers. As I mentioned in my post on maps, Bowser’s Castle is located in totally different directions from Toad Town in different games. While I’m sure Nintendo just puts it wherever it might be convenient for a particular plot, we can’t forget that the instruction book for the original Super Mario Bros. identified Bowser as ruler of the Turtle Empire. His lands might well be all over the world. We can be pretty sure the Valley of Bowser in Super Mario World isn’t the same as World 8 in SMB3, and I have to wonder if the turtle-shaped group of islands near Isle Delfino is under Koopa control as well.

One thing from the linked article that I do have to question is that the other kingdoms have no source of income other than tourism. The Beanbean Kingdom makes soda and coffee, and even Delfino has tropical fruit it can potentially export. As for Sarasaland, its name comes from that of an Indian printed cotton fabric, so perhaps it is known for its textiles. I’m not sure how much international power that gives any of these lands, however. It’s quite likely that the Toadstool dynasty is the main power in the Mushroom World, and since the sources that mention Peach’s father claim he’s incompetent, that leaves the Princess in charge.