I’ve come across several references on the Internet to Scrooge McDuck having died in 1967, and it turns out this is the idea of Don Rosa, the author of The Life and Times of Scrooge McDuck and in many ways the successor to Carl Barks. I haven’t read any of Rosa’s comics, but from what I understand, one of his desires is to create a sense of continuity between Barks’s stories. As such, he established that Scrooge was born in 1867, and set most of his adventures in the fifties, when Barks wrote them. As such, if Scrooge was going to be tied down to a timeline, it makes sense that he’d no longer be alive, and Rosa decided that he died at the age of one hundred. This timeline is not considered official, however, and I would imagine Disney’s official answer would be that Scrooge is still alive and kicking, not to mention swimming through his money. After all, Mickey and Donald certainly don’t look any older in modern cartoons than they did eighty years ago. We can also consider the Duck universe cartoons from the Disney Afternoon, but in truth I don’t remember there being any real indication as to when DuckTales took place. Some aspects, like Launchpad’s planes, tended to look rather old-fashioned by the standards of the times.

On the other hand, Darkwing Duck definitely occurred in a modern setting, as evidenced by Gosalyn’s being an avid player of home video games. (Come to think of it, how come no one has released a playable version of Whiffle Boy yet?) 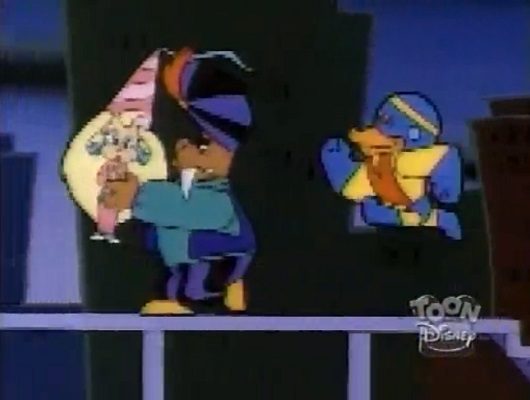 And while Scrooge never appeared on this show in person, several references made it clear that he was still active. One reason I bring this all up now is that I just became aware of this Death and Taxes article, suggesting that Scrooge might still be around as an immortal vampire. Alternatively, we could take a page from DC’s Crisis on Infinite Earths, which had the same superheroes active at different times in different universes, explaining how someone like Batman wasn’t any older in the eighties than in the forties. But that would be complicating things, wouldn’t it?

The article also addresses why Scrooge and Donald have different last names, but there’s still some complication there, as Donald is dating a woman with the same last name who (we hope) isn’t related to him. I’ve seen it proposed that Daisy is the sister of Donald’s brother-in-law, the long-lost father of Huey, Dewey, and Louie. This would explain why they call her “Aunt Daisy.” While certainly possible, I see no reason why this should necessarily be the case. The nephews might well call their uncle’s long-time girlfriend “Aunt” even if she technically isn’t. Still, if the nephews’ father also had the last name Duck, this would reduce us to two presumably unrelated Duck families instead of three. But maybe “Duck” is just as common a last name in Duckburg as “Smith” is in our world. Incidentally, Rosa confirmed that the rings on Donald and Daisy’s fingers in the picture at Scrooge’s tombstone are supposed to indicate that they’d finally tied the knot.