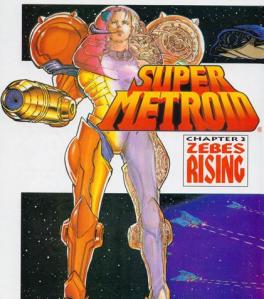 While researching the Chozo for my last post, I came across a scan of the Super Metroid comic from Nintendo Power. I wasn’t subscribing to the magazine when it was originally published, so this was the first time I’d read it. Despite some bits that were perhaps overly goofy, like a Galactic Federation member who can’t stop eating, it was pretty good. It introduced the Old Bird, one of the few surviving Chozo, who gave the background for the bird-people and how they had raised Samus Aran.

I DID subscribe when the Zelda and Super Mario comics ran in the magazine over the course of a year, and I remember there being complaints about comics being printed in a gaming magazine. I guess I can see that argument, but I personally looked forward to each new installment. The Zelda comic was based on A Link to the Past, which had just recently come out, and covered most of the highlights of the plot while diverging a bit during parts that wouldn’t have translated well to the comic format.

A few interesting bits of trivia about it include:

Then there’s Super Mario Adventures (I think this page has better scans, but they’re not complete), based on Super Mario World, but in a much looser and sillier adaptation.

That makes a certain amount of sense, as Mario games rarely have particularly engaging plots (I guess the RPGs could be considered the exceptions), and there’s something about the characters and settings that lend well to whimsical comedy. To give you an idea of the style of this comic, Bowser performs a rap when he shows up to kidnap the Princess, and then turns a group of Toads to stone in a visually absurd manner. The spell affects Mario as well, but he’s cured by a week of massage. One interesting thing about this comic is that it’s one of the earliest instances of Bowser having a thing for the Princess rather than just kidnapping her for political gain. Mario and Luigi do travel to Dinosaur Land and meet Yoshi, who wants them to help him free his fellows from captivity under the Koopas, so it does essentially follow what plot there is in SMW. Other characters include a bodyguard to the Princess who might be Toad, and the amoral but sometimes helpful salesman Friendly Floyd. In addition, I found it interesting that, while the DiC cartoons made Mario the ravenous one, presumably because he’s fatter, in this comic it’s Luigi who’s more motivated by his stomach. He’s the one who gets caught in a trap by the smell of provolone. Also worthy of notice are the sound effects, which include these gems:

There was also a Star Fox comic in Nintendo Power, but since that series never held as much interest for me, I’m not going to review it here. It’s probably somewhere on the Internet if you’re interested, though.

7 Responses to Comically Yours