I Got Street Savoir-Faire

Oliver and Company – If you want to see Charles Dickens’ classic story Oliver Twist, about the rough life of orphans in London, turned into a feel-good story about cats and dogs, this is the movie for you! Despite this rather sarcastic opening, it IS a good movie. And it’s not entirely feel-good, either, especially in the opening scene. Oliver is one of a number of kittens being offered for sale, and all of them are adopted except him. It’s really sad, and Beth cried at it even now.

Oliver meets up with Dodger, a street-smart dog voiced by Billy Joel, and follows him to the makeshift home of Fagin, a homeless man with a number of dogs. He owes money to a criminal named Sykes (probably for dog food), and the dogs steal stuff to try to help him pay off his debt, but they’re not that good at it. The fact that Fagin has been changed from a nasty corrupter of children to a kindly man who cares for pets is a good example of how much the story has changed, but the credits do say it was just “inspired by” Oliver Twist. Oliver ends up being adopted by a girl named Jenny, whose parents have a snooty purebred poodled voiced by Bette Midler.

When Fagin’s dogs misunderstand Jenny’s intentions and rescue Oliver, Fagin briefly considers holding the kitten for ransom, but quickly decides not to. 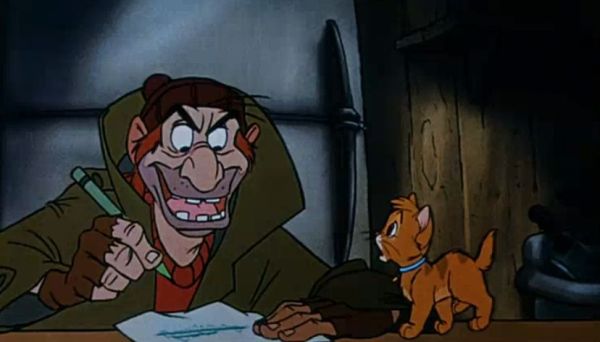 Sykes, however, has no such qualms, and kidnaps Jenny herself. A crazy chase on the subway tracks, with Sykes in his limo following Fagin and the others on a motor scooter, follows, and the limo ends up falling into the river.

One of Sykes’s Dobermans lands on the subway tracks and is electrocuted, presumably to death, which strikes me as a rather gruesome fate for an animal in a Disney movie. Granted, he was working for the bad guy, but it’s messed up regardless. Then again, we do have Tito, a Chihuahua voiced by Cheech Marin, repeatedly being electrocuted and being fine afterwards, so maybe the Doberman also survived.

Whether Sykes lives isn’t clear either, but it seems likely that he doesn’t. The ending is happy for Oliver, who gets to live with Jenny and her family, but not so much for everybody else. I mean, Sykes is off their back, but they’re still poor. And we have to wonder whether Oliver will ever see his friends again. Despite these problems, however, it’s a cute film that’s worth watching again (or for the first time, if you missed it before). It’s very reflective of its time, too, with songs by Huey Lewis and Billy Joel.