I’ve written a bit about DiC’s Legend of Zelda cartoon before, but now I’ve finished watching the DVD set, so I suppose it’s time to return to it. It was actually part of the Super Mario Bros. Super Show, with these cartoons being shown on Fridays in lieu of a Mario one. They still had live-action segments with Mario and Luigi accompanying them, but for some reason most of these aren’t included in the set. A few are, but in the much more frequent case that they’re not, every episode has just the Super Show beginning, then the Zelda introduction, the cartoon itself, and the “Do the Mario” ending. While you can skip the first intro, the second one is in the same chapter as the cartoon, which I would consider a design flaw. The Mario bits include one where the brothers have to fix Inspector Gadget, who is played by voice actor Maurice LaMarche. LaMarche voiced the Chief on the original show, and would later take over as the regular voice of Gadget. Be glad it wasn’t Matthew Broderick. Other segments feature Mr. Roper as a twentieth-century Rip Van Winkle, Moon Unit Zappa as a partying relative of Mario and Luigi, and Jan Brady as a pizza girl with a crush on Mario.

As I mentioned in the other post, the animation appears to be of a slightly higher quality than in the Mario cartoons. There are still occasional gaffes, like the wrong character’s mouth moving, but they’re nowhere near as frequent. They also tend to be a little more consistent with the rules, in that enemies and weapons usually function as they do in the game, and we don’t get such oddities as Mario running from Goombas and getting fire power from stars that the other cartoons were always giving us. For some reason, though, Link could shoot with his sword even when he’d been hit. As far as plots go, it was largely the same thing every time. Ganon would come up with a scheme to steal the Triforce of Wisdom, Link and Zelda would stop him but fail to obtain the Triforce of Power, and everything would be back to normal at the end. Also, Link would try to get a kiss from Zelda, but never succeeded.

I thought about reviewing every episode, but for many of them I can’t think of much to say beyond what Ganon’s scheme of the week is, so I’m just going to mention some highlights. There are several one-off characters in the show, including the brave but incredibly vain Prince Facade of Arcadia, the unicorn rider Sing (who’s Asian in appearance, hinting at other cultures on Hyrule’s world), a weird witch who’s actually part of a wall, and the scamming peddler Sleazenose. Zelda’s father King Harkinian, who’s portrayed as cheerful and absent-minded, shows up occasionally. 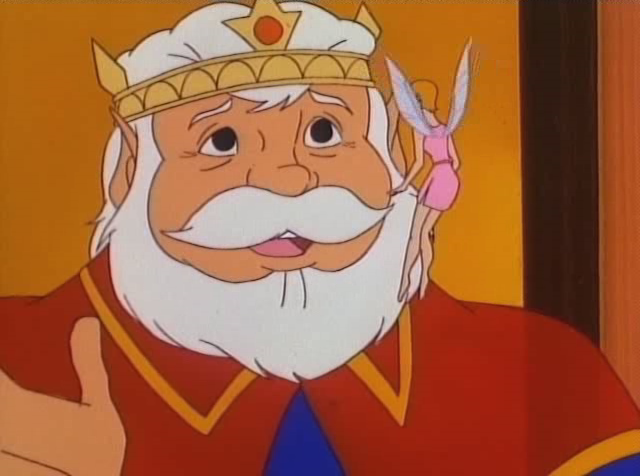 One episode, “Fairies in the Spring,” is based entirely on the King’s attempt to have a water park built, only to have the workers accidentally tap into the spring where the Fairy King Oberon lives. Ganon isn’t even in that one. Others feature such riveting subplots as Link trying to get out of chores, which he does in two different episodes. Come on, there are only thirteen episodes, and the writers feel they have to recycle ideas?

So that’s the Zelda cartoon. Not great, but it has some redeeming features, and is perhaps worth a watch by Nintendo fans. The Zelda series ended up going in a quite different direction than that suggested in the show, although Link riding a horse and having a fairy companion are ideas that became incorporated in the actual games. Not that I’m saying the show influenced the game designers, just that it’s kind of interesting that they came up with similar ideas. An interesting bit of trivia is that Link’s horse in the cartoon, as well as the Valiant comic books, is named Catherine.

Until next time, everybody, do the Link!

8 Responses to Excuse Me, Princess!