The Life and Times of $crooge McDuck, Volume One, by Don Rosa – I would like to have reviewed both volumes of this together, but it looks like the library system only has the first one, so I don’t know when I’ll be able to read the second. Anyway, Rosa is known for his comics set in Donald Duck’s universe, and for his devotion to the work of Carl Barks. According to the Internet, his desire to stick with Barks’s continuity is so fanatical that even Barks himself suggested he tone it down. If there’s a brief reference in a Barks story to Scrooge being in a particular place in 1885, then this is going to be tied into Rosa’s history somehow. Being someone who tends to obsess on the minor details of fictional works myself, I can appreciate that. While Barks never worked out a complete biography for the world’s richest duck, Rosa set out to do just that, explaining some seeming contradictions in Barks’s comics like how Scrooge could be from a poor family AND be heir to a castle, and why the first coin earned by someone who grew up in Scotland would be an American dime. Not only does Rosa tie together Scrooge’s mentions of his past in Barks’s work, but he also brings in actual history, having the adventurer meet Theodore Roosevelt and other historical figures. 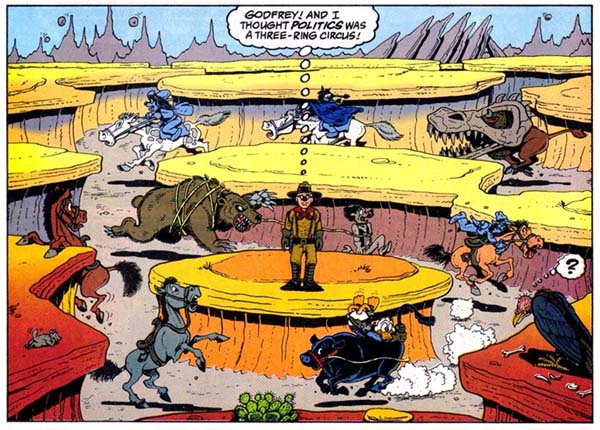 Of course, he also encounters other figures from the Duck universe, or sometimes their ancestors, like Gyro Gearloose’s grandfather Ratchet and the original Beagle Boys.

There are several references to the infamous temper of Scrooge’s sister Hortense, who of course later turns out to be Donald’s mother. Scrooge also has his first meeting with Flintheart Glomgold, who’s an interesting character in his own right.

The second richest duck in the world was another Barks creation, and while DuckTales made him Scottish like his rival, Barks originally presented him as living in South Africa. Apparently concerns with apartheid were involved in changing Glomgold’s nationality, but Rosa stuck with the original history and made Scrooge’s rival a Boer, which was made into a joke. Rosa is careful not to have Glomgold ever mention his name, so as to maintain continuity with his original appearance in which Scrooge doesn’t know who he is. As awkward as this might seem, it actually does work in context, as the young Glomgold is a criminal who probably wouldn’t want to reveal his name. I very much enjoyed the book, and I hope to be able to read the other volume someday, not to mention the additional stories Rosa wrote.