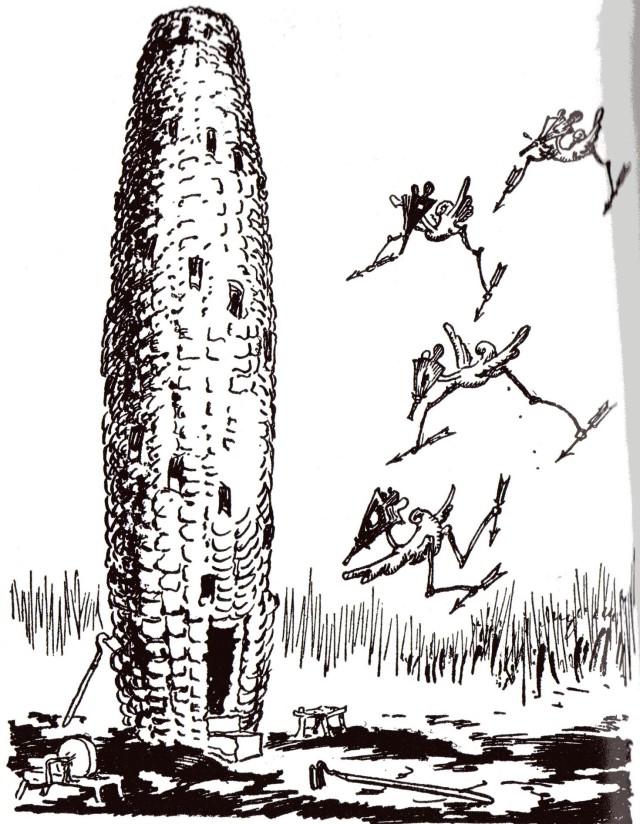 The Gabooches are characters in John R. Neill’s Lucky Bucky in Oz, but it’s not entirely clear what a Gabooch actually is. They first show up when Bucky throws enchanted doorknobs at the Nomes, and they promptly turn into four bird-like creatures with bellows as heads. They have the power to produce winds, and three of them are named Tom, Dick, and Harry. The fourth is their younger sister, whom they call the Flummux. She seems to be the most level-headed of the four, and her wind breath is a zephyr rather than a gale. They accompany Bucky and Davy on their journey to Oz, and help out several times, such as when they seek out help from the Scarecrow and Tin Woodman when the boy and the whale are buried in a talcum powder blizzard. When they reach the Emerald City, Jenny Jump’s Turn-Style turns the Gabooches human, and the Flummux says she wants to be called Little Sister, which isn’t much of a name. So were they originally humans, bellows-birds, or something else? And is “Gabooch” their family name or a term indicating the bellows-birds? In the Book of Current Focus discussion of Lucky Bucky, J.L. Bell points out that they’re no longer referred to as Gabooches after they take human form. Little Sister also says, “We were real people all the time instead of being just CREATURES,” but they later refer to the change as simply being a matter of “new clothes.” As with much in Neill’s Oz books, it’s really confusing.

For what it’s worth, a Google search reveals that there are characters named Angelo and Gina Gabooch in the 1990 film Book of Love, which I had never heard of before. I don’t know if it’s a real name, although apparently “Gaboosh” is. I also can’t help thinking of the Gibichungs from Wagner’s Ring Cycle.

6 Responses to Gabbin’ About Gabooches