I’m a Professional Cynic, But My Heart’s Not in It

Why is cynicism considered such a bad thing? Before looking at that, and because I want to pad out this entry, I’m first going to look at the origins of Cynicism.

The word actually means “dog,” and I don’t know that anyone has any idea why. 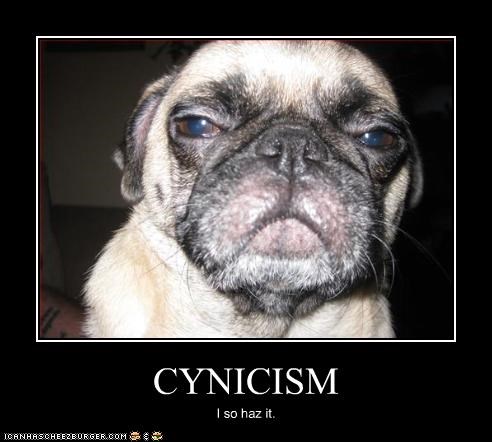 It was an ancient Greek philosophy, promoted by such people as Antisthenes and Diogenes, the guy who lived in a tub.

The main idea behind the philosophy was to live a simple, virtuous life, not necessarily totally outside society, but rejecting many of its values and norms. As such, part of Cynicism involved being a critic of cultural institutions and suspicious of human motives. In more recent years, the word has come to just mean this last part, and not so much the others. I suppose a cynic under the modern definition could be materialistic or unconcerned with virtue, while a traditional Cynic couldn’t. Anyway, I would argue that a distrust of society is a good thing, although I guess it can be taken too far. Perhaps the problem people have isn’t with cynicism itself, but rather with making cynical comments at inappropriate times. I get the impression that a lot of people simply see a cynic as a grouch, but there’s really nothing I can see that means cynics have to hate everything. A good amount of comedy, particularly satire, is based in cynicism. H.G. Wells might have been correct that cynicism is humor in ill health, but the humor is still there, and even if it can’t change anything, it can at least help us laugh at how screwed up society is. The hatred of cynicism kind of reminds me of how some theists insist that atheists must be really unhappy, when such is obviously not the case. Sure, some atheists ARE miserable, but so are some theists.

Speaking of religion, there’s some speculation that Jesus might have been influenced by the Cynics. After all, he was preaching a simple life, detachment from society, and distrust of institutions. It’s not improbable that he could have been exposed to Greek philosophy, although perhaps not totally necessary either. While Jesus might have been a Cynic, however, he was not a skeptic. He expected people to believe what he said based solely on faith, which unfortunately calls to mind modern people who are totally distrustful of some institutions (say, the government), but completely on board with others (say, the church). This partial cynicism seems to fuel a lot of modern humbug. You can’t trust the FDA or the scientific community, but you can trust whatever snake oil I’m pedaling! The skeptic, of course, would generally reject such claims, because they aren’t based in reason. In fact, it seems like the emphasis on reason is the main difference between cynicism and skepticism, although I’m sure a lot of people hold to both.