The Virgin and the Houri

It’s a popular notion these days that Islamic terrorists believe they’ll be rewarded with seventy-two virgins in Paradise. Why seventy-two? There’s somewhat of a justification for this, but as usual the meme only tells part of the story. The Quran does present Paradise as a place where the faithful are rewarded with food and sex. People there are attended to by beautiful women, described as having very attractive eyes and breasts. Jesus said that people in the Kingdom of Heaven “neither marry, nor are given in marriage, but are as the angels of God in heaven,” which doesn’t sound like as much fun. Then again, while angels are usually regarded as asexual, this certainly wasn’t the case for the Nephilim. Anyway, yeah, Muslims can apparently get laid a lot after they die, which presumably means they still have bodies. But where does the number seventy-two come from? Apparently this is in the hadith, in which someone reports Muhammad as having said, “The smallest reward for the people of Heaven is an abode where there are eighty thousand servants and seventy-two houri, over which stands a dome decorated with pearls, aquamarine, and ruby.” If that’s the SMALLEST reward, I guess quite a few people get MORE than seventy-two women. Not surprisingly, the authenticity of this passage is frequently disputed. Regardless, if these descriptions ARE meant to be taken literally, where are all these women coming from? Does Allah have a closet full of them somewhere, or do some unlucky ladies have to spend their afterlives servicing men? There’s apparently also a tradition that these women will be PERPETUAL virgins, which doesn’t sound like that much fun. Will the hymen rupture anew every time you have sex with one of them? In a way, the 80,000 servants are even weirder. What do you need even ONE servants for if there isn’t any work to do, let alone thousands of them? Apparently some people have insisted that the seventy-two virgins are actually seventy-two angels, and someone named Christopher Luxenberg thinks it’s seventy-two raisins. 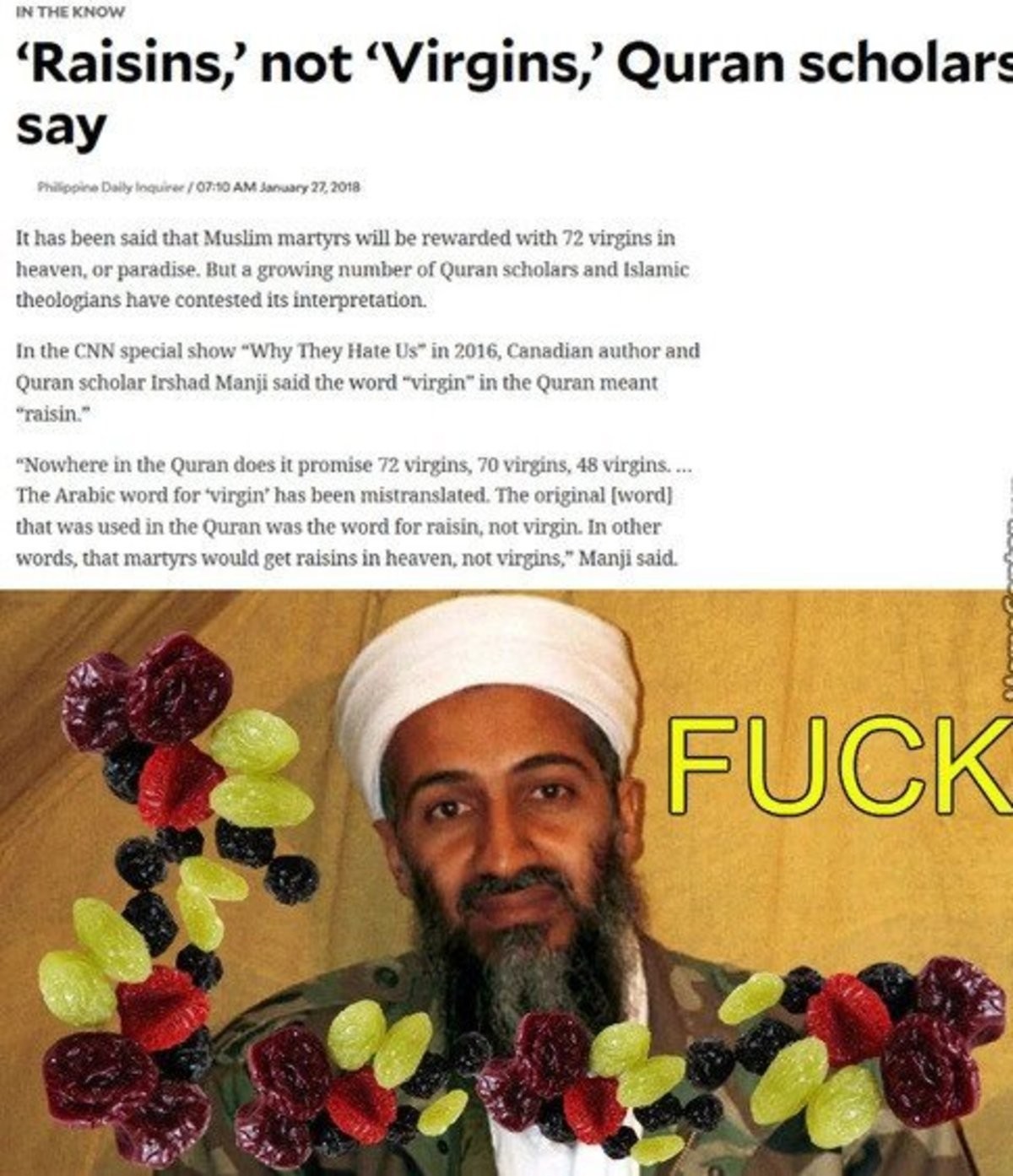 This presumably would have been a good reward back in Muhammad’s day, but not so much in ours. A lot of people, including my wife, hate raisins. Besides, even if you LIKE them, you only get seventy-two for eternity? Better parcel those out! (In fairness, I think Luxenberg was trying to translate a passage in the Quran, not the bit of hadith with the number seventy-two. Still seems unlikely, though.)

This reminds me of a passage in Terry Pratchett’s The Light Fantastic: “Rincewind wasn’t certain about what happened to you after you really died, the authorities were a little unclear on the subject; a swarthy sailor from the Rimward lands had said that he was confident of going to a paradise where there was sherbet and houris. Rincewind wasn’t certain what a houri was, but after some thought he came to the conclusion that it was a little liquorice tube for sucking up the sherbet.” Rincewind, who is functionally asexual, later has similarly mistaken definitions of “seraglio” and “concubine.” Pratchett couldn’t have been parodying Luxenberg, who hadn’t written his book yet when The Light Fantastic came out, but it sounds like the kind of thing he’d be likely to joke about. Carpe Jugulum contains a spoof on the opinion that the Biblical passage “Thou shalt not suffer a witch to live” originally said “poisoner” instead of “witch.”

Anyway, getting back to the point, it’s doubtful that too many Muslims take this stuff literally, any more than Christians really think they’ll end up participating in an eternal jam session with harps. Another description the Quran frequently gives of Paradise is that it has flowing streams of water, which isn’t as interesting to modern readers as it would have been to seventh-century Arabs. I think the general point is more that the afterlife will be more awesome than you can imagine. So no, seventy-two virgins are probably not the motivation for suicide bombers, except maybe the really stupid ones. And from what I’ve heard, the Quran forbids both suicide and killing civilians, so they’re probably out of luck anyway.

1 Response to The Virgin and the Houri