Back in the High Life Again

Robert R. Pattrick’s Unexplored Territory in Oz was a seminal work in the field sometimes known as Ozian Research, which is basically research that treats the Oz books as true history rather than fiction. Not a very practical field of study, perhaps, but fun. One of Pattrick’s essays was on magic in Oz, proposing that much of it follows the Law of Similarity. This is a common law in the working of magic in fiction as well as among real people who claim to practice the art, and is essentially a corollary of the Law of Association. As pointed out in one of the comments on this post, it explains how Nick Chopper’s replacement parts became alive when they were attached to his body.

Picture by Robert Ingpen
Okay, it doesn’t TOTALLY explain how it works, but magic is always going to have a certain amount of mystery involved. Anyway, I can’t find my copy of Unexplored Territory just now, but there was one part of the magic essay that always kind of bothered me, which was Pattrick’s assertion that magic couldn’t give anyone’s body a higher nature than it currently had. He cites the Tin Woodman and several others non-flesh beings as being unable to be turned into flesh, and the Wogglebug as being unable to be turned human. This strikes me as a bit of an anthropocentric argument.

I’ve never been that comfortable with referring to one life form as “higher” than another anyway, and in Oz it’s even less appropriate as most animals there are able to speak and reason. I think Grumpy in The Gnome King of Oz states it pretty well: “I can do everything and a boy can do and everything a bear can do, so, of course, I have twice as much fun!” Granted, most of these animals don’t have opposing thumbs, but they seem to be able to make do pretty well with what they have. Take the donkeys of Dunkiton (not in Oz proper, but following the same basic rules as far as animals go) in Road, for instance: “Having no fingers or hands the beasts were rather clumsy, as you may guess; but Dorothy was surprised to observe how many things they could do with their stiff, heavy hoofs.”

Or the bunnies of Bunnybury in Emerald City, who “used [their] paws as hands.”

As for whether an animal can be turned into a human, Kiki Aru does this with Loo the Unicorn, King Gugu the Leopard, and the Cowardly Lion in Magic. Loo is quite excited about the transformation, while the other two hate it. 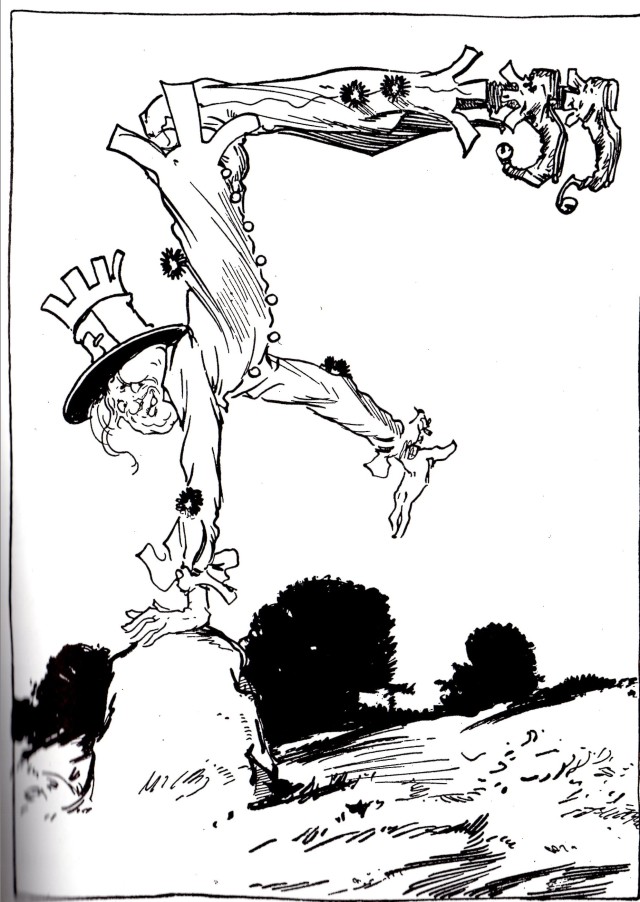 I wouldn’t be too surprised if it were possible for the Wogglebug to be magically turned human, but why would he want to be? He’d no longer be as special, or able to use the Highly Magnified title.

Much the same applies to beings like the Tin Woodman and the Scarecrow, who point out how superior their forms are to those of ordinary humans at every possible opportunity. Since the majority of such created beings in Oz don’t have to eat or sleep, they do have a pretty good case. But if one of them WANTED to become human, would it be possible? We’ve certainly seen instances of a flesh-and-blood person or animal being turned into some other material and then back, but here we can point to another rule commonly seen in magic, which is that an object acted upon by magic tends to remember what it was earlier. That doesn’t mean disenchantment is always easy, but it does mean that, if you turn a person into a credenza, disenchanting it can be done without creating the person form anew. Essentially, magic generally can’t change a person’s nature, even if it can change his or her form. I guess that doesn’t really apply to Woot the Wanderer‘s green monkey form in Tin Woodman, but maybe Yookoohoo magic operates under its own rules. Of course, Nick Chopper was flesh-and-blood at one point, but his becoming living metal was the result of a gradual change instead of a transformation as such, so maybe changing him back would be more difficult. Not that it really matters to him, as he much prefers the tin form. Melody Grandy did take the interesting track of making Nick and Captain Fyter able to switch between flesh and tin bodies, although Zim has to destroy Chopfyt in the process. Both the stone statue Benny in Giant Horse and the wooden horse Merry Go Round in her own book are assured that the Wizard of Oz would be able to turn them into flesh, but since both decide they like themselves the way they are, we never find out whether he’d actually be able to do this.

One example Pattrick does give of a possible transformation of “lower” matter into flesh is the Good Witch of the North’s trick in Road, in which she “amused the people by transforming ten stones into ten birds, the ten birds into ten lambs, and the ten lambs into ten little girls, who gave a pretty dance and were then transformed into ten stones again, just as they were in the beginning.” I have to suspect this would be considered illusion, as if she actually created ten living and thinking beings and then turned them back into rocks, it would have been awfully cruel. Perhaps the dancing girls were more like Jikki’s servants in Queen Zixi of Ix, human in appearance but with no minds of their own.