What Part of MOON Don’t You Understand?

I’ve been meaning to write about the 1902 silent film Le Voyage dans la Lune for about a month now, after watching it and seeing some information about it here.

I guess my timing is kind of appropriate anyway, since tonight’s series finalé (I think this is, like, the fourth one) made a second reference to the film, the first one being in the second episode, “The Series Has Landed.” 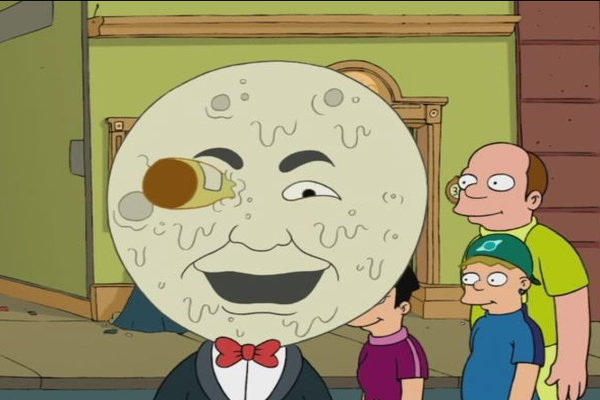 The director, Georges Méliès, based it on a few books about trips to the Moon, including Jules Verne’s From the Earth to the Moon and H.G. Wells’s The First Men in the Moon. I haven’t read either of those books, but I know the first brings humans to the Moon by means of a giant cannon built by a Gun Club. Too bad the NRA doesn’t seem to be particularly interested in space travel these days. Wells uses an anti-gravity material to get his astronauts into space, and when they reach the Moon they discover a society of insectoid people who live under the surface and eat giant fungus. Méliès uses Verne’s means of propulsion and Wells’s life forms. At least, I think the Selenites in the movie are supposed to be insect-like, even though they really look like they’re wearing striped pajamas. But hey, it WAS 1902. It was also before it was decided that astronauts should be physically fit, as here they’re a bunch of elderly astronomers. Their leader is Professor Professor Barbenfouillis, French for “messy beard” and likely a play on Verne’s character Impey Barbicane. That the Selenites disappear in a puff of smoke when they die is perhaps a reference to Lucian of Samosata’s True History, in which that’s what happens when the Moon people grow old.

Considering when it was made, the movie is a quite impressive piece of work. I mean, there’s an actual plot you can follow, quite a bit of humor, and an abundance of interesting effects. While the capsule hitting the Moon in the eye is an iconic image, it’s also been noted that we see the landing from two different perspectives, a rather novel idea for the time. One thing I do wonder about is why so much of the running time was devoted to showing the astronomers arguing. It’s also interesting to note the prevalence of pretty girls in chorus line style, which seems to have been a stage convention carried over to early films. Anyway, the film was distributed in the United States by Thomas Edison, who, due to underhanded methods and insufficient copyright laws, was able to get away with not paying Méliès any money at all. And he apparently also electrocuted dogs. Why do all of the great minds of history turn out to be such bastards?

Like Loading...
This entry was posted in Futurama, Television, VoVat Goes to the Movies and tagged a trip to the moon, from the earth to the moon, georges melies, h.g. wells, jules verne, le voyage dans la lune, lucian of samosata, moon, the first men in the moon, thomas edison, true history. Bookmark the permalink.

3 Responses to What Part of MOON Don’t You Understand?