A Pumpkin Under the Sea

The Pearl and the Pumpkin, by Paul Clarendon West and W. W. Denslow – After the success of a children’s book called The Wonderful Wizard of Oz (perhaps you’ve heard of it), there were many attempts to recapture it. This was one such book, and it’s been pointed out that it too has an American child who lives on a farm with his uncle being transported to a magical land. That said, I don’t think it’s all that imitative, but there’s definitely a similar style. Denslow illustrated the book and is credited as co-writer, but I don’t know how much of the writing he actually did. It’s interesting that part of the story takes place in Bermuda, where Denslow owned an island for a while. The tale starts on Halloween, and we learn that the protagonist Joe Miller has figured out how to make pumpkins grow to large sizes and in areas where they don’t normally grow. A baker and canner, realizing the commercial potential of this, try to get his secret from him. They are soon joined by the Ancient Mariner from Samuel Taylor Coleridge’s poem, a sea captain who killed an albatross for no reason and was forced to wander the world forever with the bird around his neck. The Mariner has been staying at Davy Jones’ Locker, which serves as a boarding house for sailors and pirates. The pirates have developed an addiction to pumpkin pie, and the Mariner is hoping that Joe’s secret will allow them to grow pumpkins underwater. The three conspirators summon a nature spirit called the Corn Dodger, who turns Joe into a boy made of pumpkins.

It isn’t the most thought-out plan, but these guys are hardly the best planners. It backfires anyway, because in this form, Joe totally forgets his secret. The baker’s name, by the way, is John Doe, but the Ancient Mariner can never remember it, leading to a running gag of his calling the pieman all kinds of bakery-related names. A few years later, L. Frank Baum would write about a gingerbread man named John Dough, and a musical would give another gingerbread man the same name. There’s something of the gingerbread man story in Pearl, in that people don’t seem to have qualms with eating a sentient but edible being. Several characters who are greedy but hardly seem evil want to make the transformed Joe into pies, and the canner Ike Cannem plans to can the Corn Dodger. It’s also curious that Joe is described as turning into a “pumpkinhead” when this book was released the same year as The Marvelous Land of Oz, in which Baum introduces Jack Pumpkinhead. 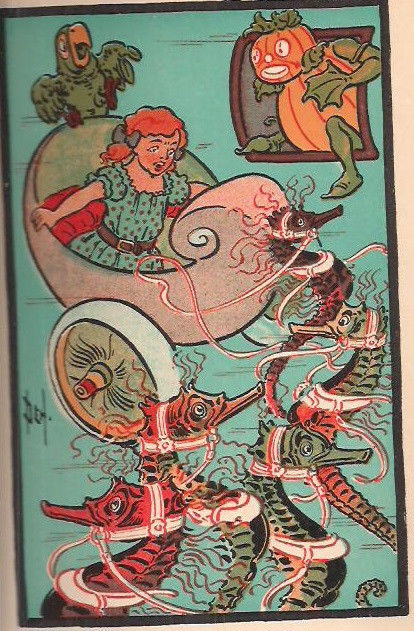 Getting back to the story, most of the characters end up underwater and pay a visit to Davy Jones’ Locker. In addition to the Ancient Mariner and Davy himself, Mother Carey and her Chickens feature in the story. Mother Carey, likely a name derived from “mater cara,” referring to the Virgin Mary, is basically a personification of the sea. She’s sometimes considered Davy Jones’ wife, but she doesn’t appear to be such in this tale. While she was apparently sometimes viewed as a threatening figure, here she’s a good fairy who wants to protect Joe.

Apparently she had played a similar role in The Water Babies. “Mother Carey’s Chickens” is a term for storm petrels, birds often thought to contain the souls of dead sailors. In Pearl, this name is given to Mother Carey’s fairy attendants. Neptune himself puts in any appearance near the end.

Everything is eventually sorted out, but it strikes me that most of the trouble could have been avoided if the other characters had made more of an effort to communicate with Joe. It’s a fun story, but it gets rather chaotic. It was made into a stage musical, but it didn’t run for very long, and I can’t say I know anything about it.

Hugh Pendexter tied the book in with Oz in his own Wooglet in Oz, in which Princess Clia, Wooglet, and Uncle Chris spend the night at Davy Jones’ Locker. The Ancient Mariner, Captain Jinks, and Bridget the Irish mermaid cook all reappear; and there are two new boarders whose ships sank in World War II. I mentioned this episode in an earlier post, but at the time I didn’t realize it was a reference to Pearl rather than Pendexter’s own invention.

8 Responses to A Pumpkin Under the Sea