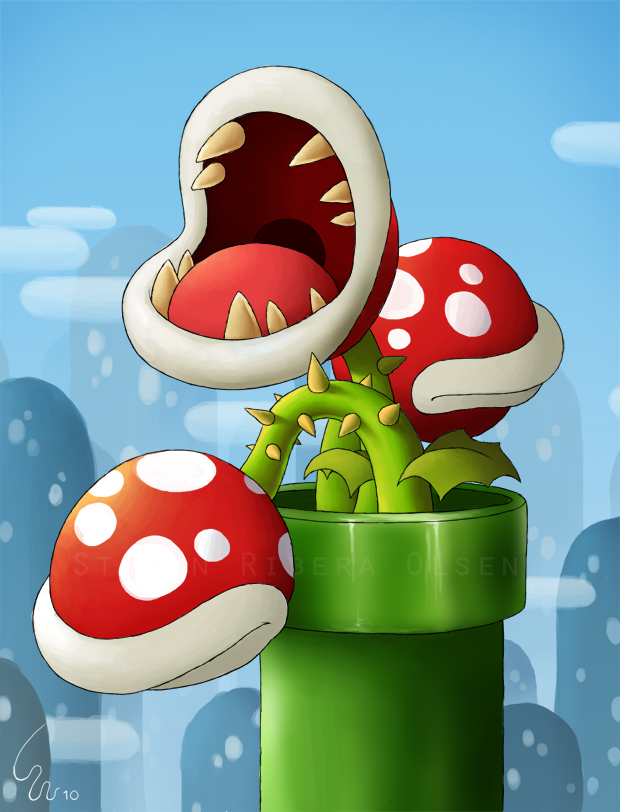 Picture by Ribera
The fact that there are plants that eat animals has certainly captured the popular imagination, including the world of video games. Many games contain carnivorous plants, but the most famous are almost certainly the Piranha Plants from the Mario games. They’re based on Venus flytraps, which snap shut to capture their prey.

Coincidentally, when I was thinking of writing a post on Piranha Plants, I noticed my wife’s computer screen had a picture of Audrey II from Little Shop of Horrors on it.

The mean green mother from outer space is also based on the Venus flytrap, and might have been influential in the appearance of the Piranha Plant. There’s also a Nintendo connection in that Levi Stubbs, who voiced the man-eating plant, used pretty much the same voice for Mother Brain in the Captain N cartoon series. Anyway, the plants in the Mario games are known as Pakkun Flowers in Japan, with “Pakkun” meaning “to eat whole.” It’s the same word on which Pac-Man’s name is based. The English name is alliterative, and while a Piranha Plant is practically nothing like an actual piranha, they ARE both quite carnivorous. Most Piranha Plants in the series live in pipes, and won’t come out if someone is touching the pipe, but there are exceptions to this. I always wondered why, if there are some pipes containing Piranha Plants that you can go down, why do you never see the bottoms of the plants?

Like most recurring enemies in the Mario series, Piranha Plants come in many different varieties. Super Mario Bros. 3 brought in the fire-spitting Venus Fire Trap and the Ptooie, which balanced a spiked ball on its lips.

Also introduced in the same game were little white plants that could walk around.

While the manual just called them “Walking Piranha Plants,” other materials gave them the name of Nipper Plants. I first came across this name in the Nintendo Power strategy guide for the game, which also referred to the huge Piranha Plants in Giant Land as “Piranhacus Giganticus.”

Munchers look a lot like Nipper Plants, but the only part of them that can move is their jaws. They can’t be killed (at least not by any means Mario and Luigi have in their repertoires), and can only be safely walked on with invincibility or a Kuribo’s Shoe. In Super Mario World, Yoshi can also walk on them, making me wonder if his shoes have soles of the same material as the ones the Goombas ride in. SMW has Piranha Plants that jump out of pipes, and if you complete the Special World and change the setting to autumn, they change to resemble pumpkins.

In later games, some Piranha Plants have been shown to have individual personalities. They’re still not that bright, but for a plant to have any kind of intelligence is pretty impressive.

And some of them have quite human libidos, apparently. Picture by Maryann Held.
The most famous is Petey Piranha, a mutated plant who can walk around and even fly, and is possibly the leader of the Piranha Plants.

He first appears in Super Mario Sunshine, and his ability to spit out goop shows up in later games as well. He’s even a playable character in some of the sports games. Other boss Piranha Plants in the Super Mario Galaxy series hatch from eggs, another animal characteristic. I guess that at least some Piranha Plants don’t fit so neatly into the plant kingdom.

Mind you, this is all taking place in a world largely inhabited by people with fungal features, so just about anything goes. The Super Mario World cartoon had a talking Venus Fire Trap named Mama Fireplant, whose job was to provide fire for the residents of Dome City.

Venus Fire Traps actually don’t appear in the game on which that cartoon is based, but apparently they were originally going to, and the writers might not have gotten the message that they’d been removed.

Another kind of hostile plant is introduced in Super Mario Bros. 2. As we all know, this one wasn’t originally a Mario game, so it doesn’t have any of the same enemies as the original SMB, but many of its characters appeared in later games.

Here we find the Pansers, described in the manual as the only plant life Wart created for the Land of Dreams, disregarding the Pokeys. Then again, maybe Wart didn’t make them. The name seems to have been created by combining the word “pansy” with the German name for a tank. I wonder if the translators also had German weaponry on their minds when naming Mouser, as Mauser was a German weapons manufacturer. If so, then I guess the fact that the Super Show cartoon pronounced Mouser’s name with a Z sound and gave him a German accent actually makes a certain amount of sense. I don’t know that I can connect any other names in that game to German weapons, though, although the Autobomb at least has a connection to Germany in general. For what it’s worth, neither Pansers nor Mousers have those names in the original Japanese; I don’t know about Autobombs. In fact, the Japanese name of the Panser, Ponkey, is also used for the quite similar Volcano Lotus in SMW. SMB3 has basically the same plant in underwater stages, called a Lava Lotus in English, but a Suichūka in Japanese. The Suichūka is a kind of artificial underwater plant, perhaps hinting that the Lava Lotuses are not naturally occurring organisms.

15 Responses to Plumber vs. Plant