You might well know by now that my wife is a fan of the horror genre, and during October that sort of movie is pretty much all we get from Netflix. Here are the ones we watched this year that basically fit into that category. There are quite a few spoilers here, if not particularly significant ones, so proceed with caution.

Tucker and Dale vs. Evil – A comedy of errors in which a group of college kids gets killed through their own clumsiness and blames two friendly, harmless hillbillies. Not exactly what I expected (despite the title, Tucker and Dale never actually fight evil), but pretty amusing in a somewhat dark way.

Behind the Mask: The Rise of Leslie Vernon – I remember seeing part of this at the Monster-Mania Convention, but this was the first time we watched it all the way through. It takes place in a universe where movies like Nightmare on Elm Street, Friday the 13th, and Halloween are true stories; and involves a few graduate students interviewing an up-and-coming serial killer. Vernon is very much an example of the punch-clock villain, doing everything according to the book and treating his killing as a job. While deconstructionist horror movies were hardly new by the time this was made, it does have some clever takes on the clichés. Robert Englund and Kane Hodder both make appearances, the latter as a resident of Elm Street. (For those of you who don’t get the joke here, Hodder actually played Jason Voorhees in four movies.)

Insidious – Not much stood out for me in this rather generic take on possession by evil spirits, but there were a few elements I liked. It included some ghost hunters of the modern reality show variety, one of them played by Leigh Whannell from Saw. And apparently the spirits are particularly fond of Tiny Tim, as one of the signs of demonic activity is that a record of “Tiptoe Through the Tulips” starts playing by itself. I guess that song IS a little creepy, huh? 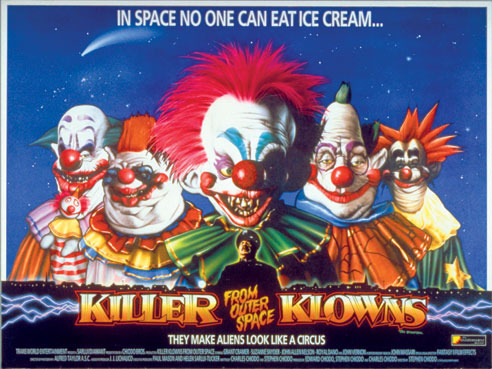 Killer Klowns from Outer Space – This low-budget comic horror film is a classic for a reason. It’s a little slow in spots, but I like its use of themed villains. The clowns arrive in a spaceship that looks like a circus tent, fire popcorn guns, make man-eating shadow puppets, throw acidic pies, and store their victims in cotton candy. It’s basically exactly what you’d expect, really.

The Burning – When kids try to scare a grouchy camp caretaker and end up burning him almost to death, he returns several years later to seek revenge. Kind of sounds like a combination of Nightmare on Elm Street (the burned caretaker) and Friday the 13th (killer at a summer camp), but it actually predates the former and was made concurrently with the latter, so this is presumably just coincidence. The killer’s name is Cropsy, after the character from urban legend in the New York City area who was also the subject of a documentary I watched last year. Even though Tom Savini worked on this movie, the effects aren’t particularly impressive. Apparently he only had three days to work on the killer. Cropsy uses a pair of shears as his weapon, and while this is okay once or twice, I found myself wanting him to switch it up a bit, not to mention that the footage of him using the shears looks the same every time. The most notable thing about this movie is that one of the camp counselors is played by a young Jason Alexander, with hair but still very recognizable.

The Machinist – More of a psychological thriller than a horror movie, but I’m including it anyway. In essence, it’s about a guy who goes crazy, and you can’t tell what’s actually happening and what’s just in his mind, with the latter often having symbolic significance. It reminded me in part of Fight Club (albeit without the humor) and Jacob’s Ladder. The ending is quite depressing, but also thought-provoking, and leaves many questions unanswered.

Chopping Mall – While this film does take place in a mall, there isn’t any actual chopping. It’s actually about robots, which means it couldn’t get more more eighties if it were soaked in Debbie Gibson’s blood. Basically, a mall gets a bunch of robots to use for security. They’re supposed to detain people without killing them and leave employees alone, but a lightning strike makes them go berserk. I’d say a thunderstorm is such a common occurrence that the designers should have accounted for it, but what electronic device IS really protected against lightning? Six teenagers decide to spend the night and have sex in a furniture store and end up having to fight the malfunctioning robots. They just had to work at the one mall in the country that had these mechanical menaces. As you’d probably expect, it’s quite cheesy and rather stupid, but mostly in an entertaining way. I did think it ended rather abruptly, though. Presumably the last two surviving teenagers have finished off all the robots, but what happens when people come back to work the next day and see what a mess the place has become?

The Fly – Not the original, but the 1986 David Cronenberg remake starring Jeff Goldblum and Geena Davis. I’d say most of the appeal for this movie comes from Goldblum’s basically just being himself, but there are some truly gross scenes in it as well. I frequently found myself wondering why Davis’ character kept confiding in her creepy ex-boyfriend. Was he literally the only other person she knew besides Goldblum’s fly-man? As with the last movie (also released in 1986, by the way), the ending was fairly abrupt.