Ruth Plumly Thompson was known to have brought several of her original creations from short stories and poems into the Oz world, including Pumperdink, Sun Top Mountain, the Land of Patch, and the Forgetful Poet. This raises the question as to how much of her other material occurs in the same universe. One interesting thing to note is that she actually used Bunbury, a town from The Emerald City of Oz, in an advertising pamphlet. See, in the early twenties, the Royal Baking Powder Company printed four of these pamphlets with poetry by Thompson, accompanied by illustrations and recipes. They were free giveaways and were not particularly high quality, so not so many still exist. Some do, however, and the texts have been preserved for posterity. Well, more or less. I actually couldn’t find a complete text of “Billy in Bunbury,” although I did come across an audio recording of the whole thing.

The poetry is in Thompson’s typical style, whimsical and loaded with puns, and usually concerns living baked goods distributing foodstuffs to people. This raises the question that always comes up with such advertising, which is why someone made of food would want his or her compatriots to be eaten. I mean, Twinkie the Kid, Mr. Peanut, and Mayor McCheese are all promoting the consumption of their fellows.

Maybe they’re like the cows in the Hitchhiker’s Guide to the Galaxy series that are bred to want to be eaten, but the way Thompson generally handled it was to make a distinction between alive and not-alive pastries. That said, she did occasionally have the live ones fear for their lives, sort of like the M&M’s in modern commercials, I guess.

Anyway, getting back to the Oz connection, the way Bunbury is described in the pamphlet is somewhat at odds with L. Frank Baum’s portrayal. While the Bunbury in Oz is located in a clearing in a forest, Thompson’s is “beside a syrup sea.”

Also, Baum’s Bunbury doesn’t appear to have a ruler, while King Hun Bun rules in Thompson’s. Then again, who knows what political changes occurred within the intervening years? 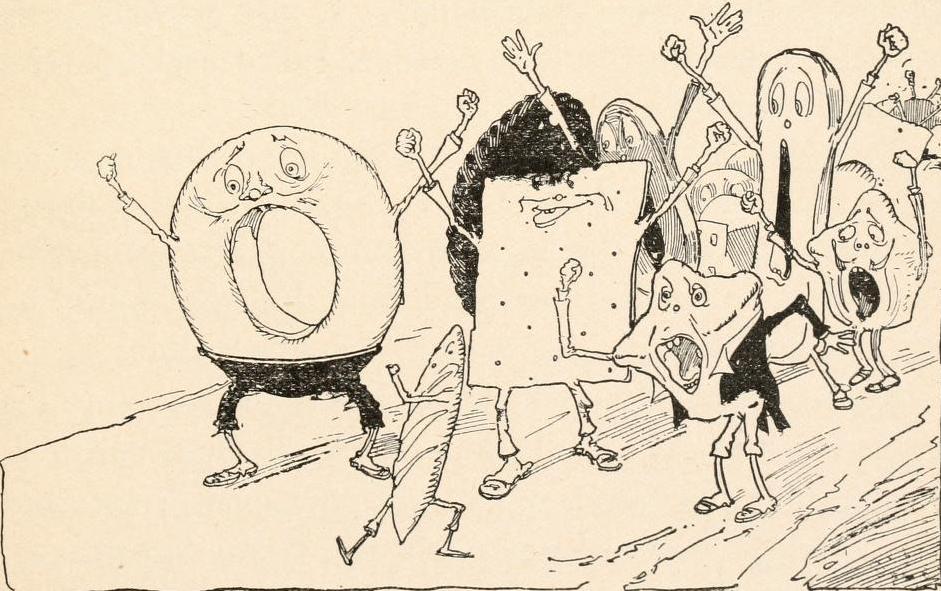 The presence of people named Johnny Cake and Sally Lunn and of doughnut trees is carried over from Baum, although admittedly these are probably puns anyone could have made.

“Billy in Bunbury” was preceded by “The Little Gingerbread Man,” which takes place in a fantasy kingdom called Jalapomp where cookies and cakes have been outlawed because the king’s cook is terrible at making them.

This probably hurt the business of all of the other bakers in the country, so this could be interpreted as a satire on absolute monarchy in a children’s recipe book. The king rescinds the edict when the cook learns from Johnny Gingerbread, the titular character, about how easy it is to make quality pastries with Royal Baking Powder. The description of Jalapomp would easily fit in with her many small kingdoms within Oz, but does this mean Royal was the first American company to distribute its product in the magical land? I also can’t help wondering if Princess Posy of Jalapomp might have grown up to be Queen Pozy Pink of Pumperdink, although that might not fit with the timeline. Kabumpo in Oz refers to the Elegant Elephant as a gift for Prince Pompadore’s christening, and Purple Prince indicates that this happened “simply Oz ages ago.” If Pozy had a child “Oz ages ago,” could she have been a child herself after 1866, when Royal was founded? Or did Thompson fudge some of the details for the benefit of her corporate employer?

The other two pamphlets in the series, “The Prince of the Gelatin Isles” and “The Comical Cruises of Captain Cooky,” are both dated to 1926; I don’t know which came first.

The former involves an island made of gelatin and inhabited by people called Gela-Tinies. There’s also a Jinn living there, who distributes gelatin crystals throughout the world. I wouldn’t be surprised to find that the Gelatin Isle is somewhere in the Nonestic Ocean.

There’s a scan of the latter available online, and while it’s pretty cute it also unfortunately reflects the preponderance of racist stereotypes from the time when it was written. The edible Captain sails in his ship, the PotsanPansy, to bring cakes to the tropical island of Bombaree, hoping it will stop their constant wars. The inhabitants of the island are stereotypical black savages, certainly not the most racist depictions I’ve seen, but something that definitely wouldn’t fly nowadays. What’s interesting is that this pamphlet was published the same year as The Curious Cruise of Captain Santa, which had a similar title and plot, and included a visit to the cannibal island of Bombazooky. Thompson was pretty obviously recycling ideas here. Incidentally, I have to wonder if Thompson’s tale about food-themed seafaring adventures were at all influential on Cap’n Crunch.

And while we’re linking Oz and advertising, I should mention that David Hulan’s Glass Cat makes Borden’s mascots Elmer and Elsie emigrants from Oz.

Also, Johnny Gingerbread and the Dough-Dough Bird from “Captain Cooky” both show up in Marin Elizabeth Xiques’ Bouncy Bunnies.

You can find reviews of all these mini-books, with a lot of pictures, at Wannabe Wonderlands.

7 Responses to Let’s Get Baked