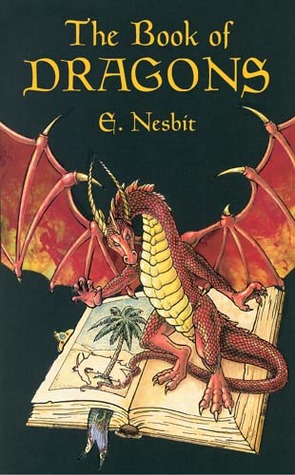 The Book of Dragons, by Edith Nesbit – What creature represents fantasy in general better than the dragon? While the general portrayal of dragons makes them nasty, ravenous thieves, it’s certainly not unheard of for them to be noble and even friendly. In this collection of short stories from the turn of the twentieth century, Nesbit deals with dragons of quite different compositions and dispositions. Her style is light and humorous, with her frequently talking directly to the reader. One frequent theme in Nesbit’s work is the contrast of childhood whimsy to the cold, hard facts learned in school; and a lot of the more absurd moments in her tales play on this. For instance, she writes in one story, “You will hear grown-up people talk a great deal of nonsense about the North Pole, and when you are grown up, it is even possible that you may talk nonsense about it yourself (the most unlikely things do happen) but deep down in your heart you must always remember that the North Pole is made of clear ice, and could not possibly, if you come to think of it, be made of anything else.” In another one, the newspapers refuse to call dragons by their proper name because no one believes in them, until one of them carries off and eats the editor. Another hallmark of Nesbit’s fantasy is the mixture of traditional elements with more familiar ones to children of her own day. Some of them bring magic into England, while others are set in fairy tale kingdoms with modern touches.

The Book of Beasts – Probably the most famous of the stories, I recall seeing a picture book of just this tale. It’s about a young king who reads a bestiary that belonged to his ancestor, and finds that the animals on the pages come to life. People, animals, and objects coming into or out of books is a theme I’ve come across quite frequently (I’ve recently written about its use in the video game that became Super Mario Bros. 2 and one of L. Frank Baum’s American Fairy Tales), but Nesbit has some of her own takes on the trope.

The king accidentally sets loose a dragon that terrorizes the kingdom, then a manticore to fight it, only to find out that the manticore is a coward.

When the monsters finally are returned to whence they came, everything they ate is restored because it won’t fit into the book.

Uncle James, or The Purple Stranger – This one takes place on the island of Rotundia, which was spinning the wrong way when the world first came into being, hence all the animals are the wrong sizes. Elephants and rhinoceroses are tiny, and guinea pigs and rabbits enormous. When a purple dragon comes to this land, the princess’ wicked uncle uses it in a plot to get rid of the princess and rule the country himself. His plan is thwarted by the princess and her best friend Tom, and the dragon ends up reversing the island and changing the sizes of the animals to normal.

The Deliverers of Their Country – When England is beset by a plague of dragons of all shapes and sizes, two heroic children first seek help from St. George, who is sleeping at St. George’s Church. (Nesbit lampshades how fortuitous it is that they go to the right church even though there are many churches with that name.) When he refuses to take on so many at once, they instead take his advice to find the Universal Tap Room, where bathroom taps are used to control the weather. They make England cold and rainy to drive off the dragons, which prefer sunny weather, hence explaining the climate of the country.

The Ice Dragon, or Do as You Are Told – Despite being warned to stay off the lawn, a practical boy named George and his dreamy little sister Jane set off for the North Pole to find the source of the Northern Lights. Their journey is made easier by an express route that the polar bears use to go thrift shopping. Not only do they find the Pole to be an actual physical object made of ice, but there’s also a dragon wrapped around it.

The Aurora Borealis is explained as a bunch of fires set by a gang of dwarfs made of sealskin, who want to wake up the dragon and have it eat everybody. Kind of Lovecraftian, I suppose. This story also fits the frequently used fairy tale mode of the children being helped by animals they assisted along the way. The story also tells us that dragons can go uphill just as easily as downhill because they can reach their tails into the fourth dimension. Was this the first appearance of dimensional physics in a children’s story? Also amusing is when George refers to the constellations of “the Great Bear, and the Dipper, and the Plough, and Charles’s Wain,” which are actually all the same constellation. The dragon wrapped around the Pole might itself be a reference to the stars, specifically to Draco in relation to the North Star.

The Island of the Nine Whirlpools – When a nasty king with magical powers has a daughter instead of a son, he imprisons her in a tower on an island surrounded by nine whirlpools, with a dragon and a griffin to guard her. When a prince comes to rescue her, he has to work math problems in order to overcome the monsters and escape the island. I kind of felt bad for the dragon and griffin, which aren’t really evil but are killed anyway. Nesbit even tells us at the end that “it wasn’t [the griffin’s] fault that it had been made so badly and put to such poor work as guarding a lady from her lover.” The story starts with the queen getting help from a witch in having a child. The witch wants someone to love her, and the queen assures her that she does. If the story had been modern fan-fiction, I suppose the queen would have left her evil husband and gotten romantically involved with the witch. Actually, I guess Nesbit never specifically says this didn’t happen.

The Dragon Tamers – A blacksmith who lives and works in a ruined castle finds out that there’s a dragon living in the basement, and both he and his son have dealings with the creature. Eventually the son tames it and its plates and wings fall off, turning it into a cat.

It ends with the rather absurd moral that you should feed your cat bread and milk, because “If you were to let it have nothing to eat but mice and birds it might grow larger and fiercer, and scalier and tailier, and get wings and turn into the beginning of dragons.” Was it really common to give cats bread back when this story was written? I’ve had cats that would eat bread and all kinds of other things, but I wouldn’t think it would ever be a common part of a feline diet. This tale also includes some light political satire, with the mayor and corporation repeatedly managing to get out of rewarding the people who save the city.

The Fiery Dragon, or The Heart of Stone and the Heart of Gold – Another story of a royal usurper, this time the rude and clumsy Prince Tiresome, who steals the kingdom from his young cousin. Tiresome’s hobby is hunting with a group of clumsy hippopotami, and he cheats a pig-keeper who helps him capture a dragon. Everything eventually works out all right for the rightful princess and the pig-keeper, however. St. George is mentioned in this story as well, being the princess’ grandfather.

Kind Little Edmund, or The Caves and the Cockatrice – The last of the stories features a boy who is eager to find out things he can’t learn at school, which leads to him investigating mountain caves from which strange noises can be heard. Here he befriends a cockatrice and accidentally lets a dragon loose. The boy and the cockatrice restore the town after the dragon eats it, but nobody at Edmund’s school believes him, even though the place changes location in the process.