One part of Home Alone that always rang false to me was…well, pretty much the whole thing. But the particular part I’m thinking of is when Kevin is in the grocery store, and the cashier starts demanding to know where his parents are. I can remember going to the store when I was not much older, and no one ever grilled me. Mind you, I lived in a small town, but I doubt the store in the movie was supposed to be very far from the residential district. Kids probably came in there by themselves all the time. Anyway, this got me thinking about the common conception that parents now are overprotective and never let their children go anywhere on their own. Here’s a map J.L. Bell recently tweeted that drives home this point: 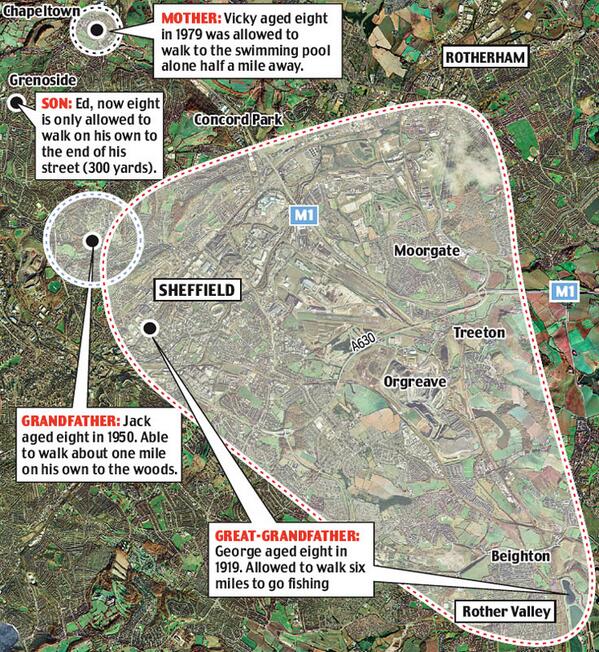 I also thought about the woman who wrote a book about her young son riding the subway by himself, which caused some consternation. Mind you, some of it was at her using her kid to sell a book, not that plenty of other writers haven’t done the same. I have to suspect, however, that there are plenty of children riding the subway who HAVEN’T had books written about them. Some kids in the city have to ride the subway to school, don’t they? I suspect there’s a socioeconomic factor involved here, with the sheltering of kids being a privilege of those parents who have the time and money to drive their kids places. Not that this is the only factor, as where you live is also significant, but I wouldn’t be too surprised if poorer kids often walk or ride public transportation on their own simply out of necessity. Still, there definitely does seem to be an upsurge in paranoia, and I doubt the world is any more dangerous now. People apparently think it is, though. Just because you didn’t lock your doors when you were a kid doesn’t mean there were fewer break-ins. I’m not saying the world isn’t dangerous, just that I don’t think the reactions have increased proportionally with the danger. Then again, I don’t have any kids.